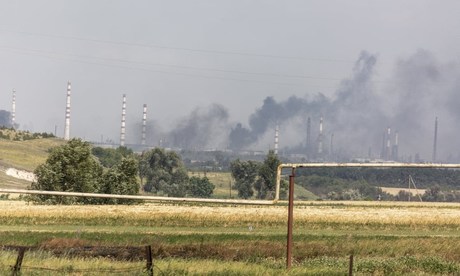 Fighting raged as Russian troops intensified their offensive in parts of the hard-fought Ukrainian city of Lysychansk on Sunday, after Belarus announced its military had intercepted missiles fired by Kyiv's forces.

"The Russians are entrenching themselves in a district of Lysychansk, the city is on fire," Sergei Gaidai, governor of the Lugansk region, said on Telegram.

"They attacked the city with inexplicably brutal tactics," he added.

Lysychansk is the last major city in the Lugansk area of the eastern Donbas region still in Kyiv's hands.

Located across the river from neighboring Severodonetsk, which Russian forces seized last week, its capture would signal a deeper push into the Donbas which has become Moscow's focus since failing to capture Ukraine's capital.

Gaidai's update came hours after Ukraine denied claims by Moscow-backed separatists that they had encircled Lysychansk.

"The city has not been encircled and is under control of the Ukrainian army," Ruslan Muzytchuk, a spokesman for the Ukrainian National Guard, said on Ukrainian television on Saturday.

Earlier in the day, Andrei Marochko, a spokesman for the separatist forces, told the TASS news agency that Lysychansk was "completely encircled."

The intense fighting came as Belarusian leader Alexander Lukashenko accused Kyiv of "provoking" his country and said his army intercepted missiles fired at his country by Ukrainian forces "around three days ago."

The claim came one week after Ukraine said missiles struck a border region from Belarus, a long-term Russian ally that supported the February 24 invasion.

But Lukashenko denied any involvement, which would represent an escalation of the conflict.

"As I said more than a year ago, we do not intend to fight in Ukraine," he was quoted as saying by state news agency Belta on Saturday.

The violence also spilt into Russia on Sunday, with at least three people killed and four injured in "strong explosions" in Belgorod, which borders Ukraine.

Belgorod governor Vyacheslav Gladkov said 11 residential buildings and 39 houses were damaged but stopped short of accusing Ukrainian forces of being behind the strikes.

But Russia has previously accused Kyiv of conducting strikes on Russian soil, particularly in the Belgorod region.

Missiles continued to rain down across Ukraine, killing dozens.

Ukrainian President Volodymyr Zelensky cited six strikes as of the evening in his daily address to the nation late Saturday.

"Fierce fighting continues along the entire front line, in Donbas," he added, noting as well that "enemy activity in the Kharkiv region is intensifying."

In the small Donetsk town of Siversk, one resident told AFP that "the bombing goes on day and night."

Two people were killed and three wounded -- including two children -- in a strike on the town of Dobropillya, local authorities in Donetsk said.

Rockets also struck residential properties in Sloviansk in the heart of the Donbas, killing a woman in her garden and wounding her husband, a neighbour told AFP Saturday, describing debris showered across the neighborhood.

The witness said the strike, which took place on Friday, was thought to use cluster munitions, which spread over a large area before exploding, striking buildings and people who were outdoors.

Zelensky warned against "a feeling of relaxation" in many rear cities.

"The war is not over," he said. "Unfortunately, its cruelty is only increasing in some places, and it cannot be forgotten."

Russian defence ministry spokesman Igor Konashenkov said Ukraine was "suffering heavy losses on all fronts", listing what he said were military targets across the country hit with artillery and missiles.

In his address, Zelensky also looked forward to a conference on Ukraine's reconstruction set to start Monday in Switzerland.

Leaders from dozens of countries and international organisations will gather in the city of Lugano with the aim of providing a roadmap for the war-ravaged country's recovery.

He said 10 regions of Ukraine had been affected in the war, with many towns and villages needing to be "rebuilt from scratch".

The roadmap is expected to lay out reconstruction needs in terms of damaged and destroyed infrastructure, Ukraine's devastated economy, and also environmental and social recovery needs.

The effort is expected to cost hundreds of billions of dollars.

Ukraine will also face demands for broad reforms, especially in cracking down on corruption.

The need for reforms had been underscored by European Commission, Ursula von der Leyen, who has said the coveted European Union membership was "within reach" for Ukraine, but urged Kyiv to work on anti-corruption measures.

Farmer Sergiy Lioubarsky, whose fields are close to the frontline, warned time was running out to harvest this year's crop.

"We can wait until August 10 at the latest, but after that, the grains are going to dry out and fall to the ground," he said.

Western powers have accused Putin of using the trapped harvest as a weapon to increase pressure on the international community, and Russia has been accused of stealing grain.