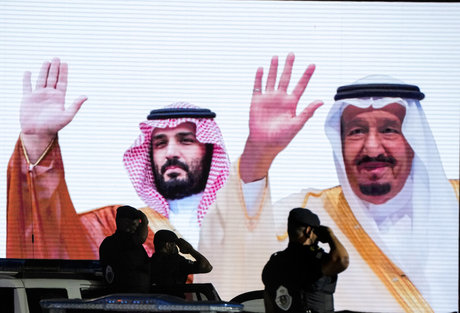 Israeli journalist Yoav Limor did not know what to expect when he travelled with a colleague this month to Saudi Arabia, a country long notorious for promoting anti-Israel sentiment in textbooks and in sermons by some imams.

They were in for "a pleasant surprise", he wrote in a subsequent column for the Israel Hayom newspaper, as Saudi market vendors and taxi drivers mostly greeted them with curiosity rather than disdain.

"Some smiled and shook their head in disbelief or worry. Others were curious and struck up a conversation," wrote Limor, adding that "no one made us feel unwelcome".

U.S. President Joe Biden's trip to the Middle East, which began on Wednesday, has fuelled speculation of a possible breakthrough in normalizing ties between Israel and Saudi Arabia, which does not recognize the Jewish state.

The kingdom has repeatedly said it would stick to the decades-old Arab League position of not establishing official ties with Israel until the conflict with the Palestinians is resolved.

Analysts stress that, despite growing behind-the-scenes business and security contacts, any immediate gains are likely to be more incremental than the U.S.-brokered Abraham Accords which created ties between Israel and two of the kingdom's neighbors, the United Arab Emirates and Bahrain.

Yet the experience of Limor, who qualified for a tourist visa because he holds a non-Israeli passport, hints at changes in Saudi public opinion that officials hope could one day lay the groundwork for a formal bilateral relationship.

U.S. officials say it shows meaningful progress towards the kind of deal that would, for Israel, represent the ultimate diplomatic prize.

"For too many decades, the Kingdom of Saudi Arabia was a great exporter of Jew-hatred," said Deborah Lipstadt, Washington's special envoy to combat anti-Semitism, in a speech this month after visiting the kingdom in June.

"But what I found is something quite different, something that has changed there dramatically in the last few years."

Signs of that transformation appeared well before the Abraham Accords pushed by the Trump administration, which Riyadh has so far refused to join.

Saudi textbooks once denigrated Jews and other non-Muslims by depicting them as animals and asserted that "disobedience is the characteristic of the Jews".

But they have been undergoing revisions for years, as documented by the Israeli nonprofit group IMPACT-SE which monitors textbook content.

At this point, anti-Jewish material has been "largely removed, which is greatly to be admired", the group said in a June report.

The Saudi education ministry did not respond to a request for comment on the textbooks.

Anti-Israeli speech by imams is also "generally rare", and the Islamic affairs ministry has encouraged a "rejection of bigotry", the U.S. State Department said in its latest human rights report on Saudi Arabia.

Mohammed al-Issa, a Saudi cleric who heads the Muslim World League, won praise from Israel in January 2020 after he travelled to Poland for events marking 75 years since liberation of the Nazi death camp Auschwitz.

King Salman hosted Jerusalem-based rabbi David Rosen the following month, and during Ramadan that year the Saudi-controlled MBC network aired a television show in which a character brushed aside the taboo of doing business with Israel.

Further examples have cropped up since the Abraham Accords were unveiled in August 2020.

In a sign that the Saudi leadership may no longer fear a fierce backlash to eventual normalization, state media in March quoted Crown Prince Mohammed bin Salman, the de facto ruler, describing Israel as a "potential ally".

What impact these moves have had on public opinion can be difficult to gauge in an absolute monarchy which places strict limits on political expression.

There is little chance of Riyadh shifting its focus to ties with Israel "while ignoring the Palestinian issue", nor is that something ordinary Saudis would want, said Mohammed Alyahya, a fellow at the Belfer Center at Harvard University.

"The public sentiment has changed, but I don't think it's changed in such a way that people don't care about Palestine anymore, or people don't hold Israel to account for crimes it commits," Alyahya said.

The kingdom's internal dynamics are different from those of its neighbors, said Brian Katulis of the Middle East Institute in Washington.

"I don't see a broad wellspring of more openness that you see in places like the Emirates that are much smaller, where you can do sort of interfaith things and have a synagogue. I think that's slower to happen in a place like Saudi Arabia right now," Katulis said.

Saudi officials have been tight-lipped on potential outcomes from Biden's visit and did not respond to a request for comment on possible agreements concerning Israel.

Whatever emerges –- like allowing direct flights from Israel to Saudi Arabia for Muslim pilgrims –- is likely to stop well short of full normalization.

That may be all many Saudis can stomach for now.

"It is impossible for me to go to Israel one day. I do not like them," said Abo Rashed, an auto parts salesman in the capital who referred to Israelis as "occupiers".

"But the government knows better. They will choose whatever is best for the people and the country."