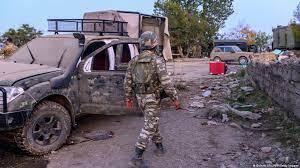 Two soldiers were killed Wednesday over the breakaway region of Nagorno-Karabakh as the two warring sides accused each other of ceasefire violations.

Arch enemies Armenia and Azerbaijan fought two wars -- in 2020 and in the 1990s -- over Azerbaijan's Armenian-populated region of Nagorno-Karabakh.

Armenia ceded swathes of territory it had controlled for decades, and Russia deployed some 2,000 peacekeepers to oversee the fragile truce, but tensions persist despite a ceasefire agreement.

On Wednesday, the Azerbaijani defense ministry said Karabakh troops targeted Azerbaijani army positions in the district of Lachin, which is under the supervision of the Russian peacekeeping force, killing an Azerbaijani conscript.

The foreign ministry in Baku said that the "bloody incident" demonstrated that Armenia did not respect the ceasefire agreement.

"All responsibility for the incident in Azerbaijan lies with military and political leadership of Armenia, which has not yet withdrawn its illegal armed formations from the territory of the neighboring state," the foreign ministry said in a statement.

The army of the breakaway statelet accused Azerbaijan of violating a ceasefire Wednesday morning and killing one soldier and wounding another eight at the line of contact later in the day.

"Measures are being taken together with Russian peacekeepers to stabilize the situation," the Karabakh army said in a statement.

Six weeks of fighting in the autumn of 2020 claimed more than 6,500 lives and ended with a Russian-brokered ceasefire agreement.