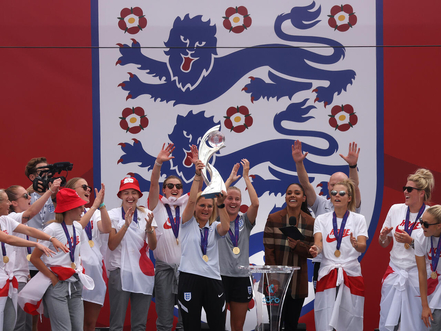 England's Euro 2022 winning footballers on Wednesday urged the two candidates vying to become the UK's next prime minister to ensure that all girls have access to the sport at school.

All 23 members of the squad, which beat Germany 2-1 in Sunday's final at a sold-out Wembley Stadium, signed an open letter to Conservative Party leadership candidates Rishi Sunak and Liz Truss, calling on their help to "create real change in this country."

"Currently only 63 percent of girls can play football in PE (physical education) lessons. The reality is we are inspiring young girls to play football, only for many to end up going to school and not being able to play," they wrote.

"This is something that we all experienced growing up."

The players asked the two candidates to pledge to ensure that all girls have access to at least two hours of PE sessions each week, where football is offered.

"We have made incredible strides in the women's game, but this generation of schoolgirls deserves more," they wrote.

"We want to create real change in this country and we are asking you, if you were to become Prime Minister on 5 September, to help us achieve that change."

Both candidates responded to the Lionesses' call, without making any firm commitment on schoolgirls being able to play football.

Truss's campaign responded by saying the candidate "is committed to investigating what prevents schools from delivering the recommended minimum of two hours PE per week."

Sunak's spokesman said he "would love to see all schools provide two hours of PE a week."