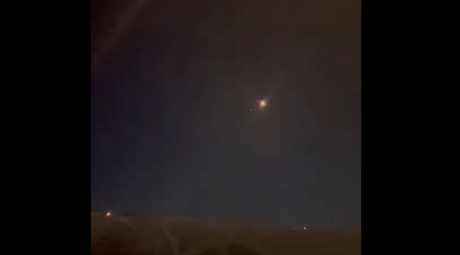 Hezbollah targeted an Israeli drone over the Bekaa Valley in the village of Meidoun on Thursday night with anti-aircraft fire, media reports said, amid conflicting reports on whether the drone was shot down or not.

Videos circulated online showed Hezbollah anti-aircraft systems opening fire at the drone, while a source has told American news website Long War Journal that the drone was unharmed by the fire.

The incident comes amid heightened tensions between Hezbollah and Israel, since Israel moved a production vessel into Karish, parts of which are claimed by Lebanon. Hezbollah threatened Israel against proceeding with extraction, while Lebanese authorities called for the resumption of U.S.-mediated negotiations over the border demarcation with Israel.

God bless our Shia resistance aka the Lebanese Army for targeting an Israeli drone over the Bekaa Valley thus protecting our sovereignty and making us proud. Citizens across the globe are in awe over our Shia resistance' accomplishments be it on the battlefield or on the economic front.

Our Shia ambassadors across the globe are reporting their embassies are flooded with thousands of applications for Lebanese citizenship. Our Shia resistance has made the Lebanese Passport a much sought after asset valued the world over.

The young generation and millenials all over the world are learning what it means to be a proud Lebanese.

Why write an article if they didn’t even manage to shoot down a drone hovering over the Beqaa at a speed of 50 km/h !