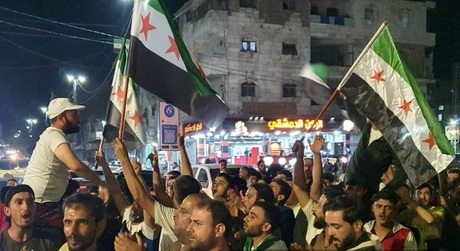 Protests broke out in Syria's rebel-held north on Friday over a call from Turkish Foreign Minister Mevlut Cavusoglu for reconciliation between the Syrian government and opposition.

"We have to somehow get the opposition and the regime to reconcile in Syria. Otherwise, there will be no lasting peace, we always say this," Cavusoglu said Thursday, in remarks to diplomats.

The comments have sparked calls for protests after Friday weekly prayers in key cities that fall under the control of Turkish forces and their supporters, including in Al-Bab, Afrin and Jarablus.

Similar calls were made in Idlib, controlled by Hayat Tahrir al-Sham and other rebel groups, to gather at border crossings with Turkey.

Small protests already began overnight in some areas, including Al-Bab, where dozens gathered holding opposition slogans and chanting against Turkey.

Some demonstrators burned a Turkish flag, while others took down Turkey's colors hung up around the city, an AFP photographer said.

Dozens of others gathered at the Bab al-Salama crossing to Turkey, many shouting "death rather than indignity".

Turkey's top diplomat also revealed that he had held a short meeting in Belgrade in October with his Syrian counterpart Faisal al-Meqdad, adding that communication had resumed between the two countries' intelligence agencies.

But he denied direct talks between Turkish President Recep Tayyip Erdogan and his Syrian counterpart Bashar al-Assad, despite long-standing calls from Russia for such dialogue.

Cavusoglu added that Turkey would continue its fight against "terrorism" in Syria, following warnings from Ankara since May that it could launch new strikes on Kurdish-held areas in north and northeast Syria.

Ankara has launched successive military offensives in Syria. Most have targeted Kurdish militants that Turkey links to a group waging a decades-long insurgency against it.

Cavusoglu's comments have sparked widespread anger among the opposition, with renowned figure George Sabra writing on Facebook: "If Cavusoglu is concerned with reconciling with the Syrian regime, that is his business. As for the Syrians, they have a different cause for which they have paid and continue to pay the dearest price."

About half a million people have died during Syria's 11-year conflict, which has destroyed large swathes of the country and displaced millions of people.

The six rebels are mooting a deal to move to Hollywood, said their seventeen literary agents.