Blinken urges calm on Taiwan in talks with China 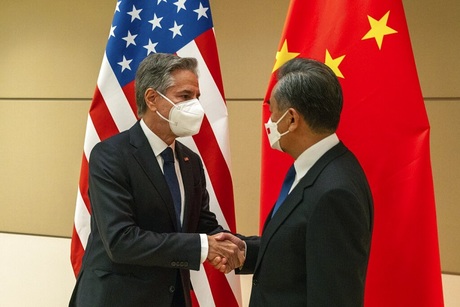 U.S. Secretary of State Antony Blinken has called for calm over Taiwan as he met his Chinese counterpart, as soaring tensions showed signs of easing a notch.

Blinken met for 90 minutes with Chinese Foreign Minister Wang Yi in New York on the sidelines of the United Nations General Assembly, in talks a U.S. official described as "extremely candid" and focused largely on Taiwan.

Blinken "stressed that preserving peace and stability across the Taiwan Strait is critical to regional and global security and prosperity," a State Department statement said.

He "discussed the need to maintain open lines of communication and responsibly manage the U.S.-PRC relationship, especially during times of tension," it added, using the acronym for the People's Republic of China.

A State Department official described the exchange on Taiwan as "direct and honest."

The official said Blinken also renewed US warnings not to support Russia's invasion of Ukraine, amid guarded US hopes that Beijing is taking a distance from Moscow, nominally its ally.

Wang met in New York with Ukraine's foreign minister for the first time since the war and, in a Security Council session Thursday, emphasized the need for a ceasefire rather than support for Russia.

Blinken, who went ahead with the talks despite the death of his father the previous day, met Wang for the first time since a sit-down in July in Bali, where both sides appeared optimistic for more stability.

One month later, House Speaker Nancy Pelosi visited Taiwan, infuriating Beijing, which staged exercises seen as a trial run for an invasion of the self-governing democracy, which it claims as its territory.

And in an interview aired Sunday, President Joe Biden said he was ready to intervene militarily if China uses force in Taiwan, once again deviating from decades of U.S. ambiguity.

In the meeting with Blinken, Wang accused the U.S. of "sending very wrong and dangerous signals" encouraging Taiwan independence, the Chinese foreign ministry said in a readout.

Wang told Blinken that China wished for "peaceful reunification" with Taiwan and warned that "the more rampant 'Taiwan independence' activities are, the less likely a peaceful solution would be," according to the foreign ministry.

The U.S. official said Blinken insisted to Wang that "there has been no change" to the U.S. policy of only recognizing Beijing and voiced opposition to "unilateral changes to the status quo" by either side.

In a sign that tensions have eased, Wang also met in New York with U.S. climate envoy John Kerry, despite China's announcement after Pelosi's visit that it was curbing cooperation on the issue, a key priority for Biden.

But in a speech before his talks with Blinken, Wang called Taiwan "the biggest risk in China-US relations" and accused the United States of stoking pro-independence forces.

"Taiwan independence is like a highly disruptive great rhinoceros charging toward us. It must be stopped resolutely," he said at the Asia Society think tank.

"Just as the US will not allow Hawaii to be stripped away, China has the right to uphold the unification of the country," he said.

He denounced the US decision to "allow" the Taiwan visit by Pelosi, who is second in line to the presidency after the vice president. The Biden administration, while privately concerned about her trip, noted that Congress is a separate branch of government.

But Wang was conciliatory toward Biden. The New York talks are expected to lay the groundwork for a first meeting between Biden and President Xi Jinping since they became their two countries' leaders, likely in Bali in November on the sidelines of a summit of the Group of 20 economic powers.

Wang said that both Biden and Xi seek to "make the China-US relationship work" and to "steer clear of conflict and confrontation."

The US Congress is a stronghold of support for Taiwan, a vibrant democracy and major technological power.

Last week, a Senate committee took a first step to providing billions of dollars in weapons directly to Taiwan to deter China, a ramp-up from decades of only selling weapons requested by Taipei.

Tensions have also risen over human rights, with the United States accusing the communist state of carrying out genocide against the mostly Muslim Uyghur people.

Let me give Naharnet some advice on how to "calm" down: if you focus your mind on what's important, you will suddenly realize you have calmed down.