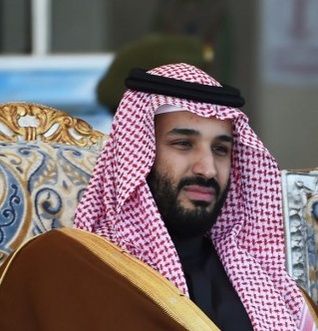 The move effectively formalizes power already wielded by Prince Mohammed, who has been the kingdom's de facto ruler for several years, analysts said.

The heads of other critical ministries, including interior, foreign and energy, remained in place, according to a royal decree from King Salman published by the official Saudi Press Agency.

Prince Mohammed, who turned 37 last month, has been first in line to succeed his father as king since 2017.

Saudi Arabia has for years sought to quell speculation over the health of the 86-year-old king, who has ruled the world's top oil exporter since 2015.

In 2017, it dismissed reports and mounting speculation that the king was planning to abdicate in favor of Prince Mohammed.

King Salman has been hospitalized twice this year, most recently a one-week stay in May that involved tests including a colonoscopy, according to state media.

Prince Mohammed became defense minister in 2015, a key step in a swift consolidation of power.

In that role he has overseen Saudi Arabia's military activities in Yemen, where the kingdom leads a coalition backing the internationally recognized government in its fight against Iran-aligned Huthi rebels.

He has also become the public face of a sweeping reform agenda known as Vision 2030.

Yet he has also jailed critics and, in a sweeping purge of the nation's elite, detained and threatened some 200 princes and businessmen in Riyadh's Ritz-Carlton hotel in a 2017 anti-corruption crackdown that tightened his grip on power.

He gained global notoriety for the 2018 killing of dissident Saudi journalist Jamal Khashoggi in the kingdom's Istanbul consulate.

But the spike in energy prices triggered by Russia's invasion of Ukraine spurred a number of Western leaders to travel to Saudi Arabia to appeal for ramped-up oil production, notably then-UK prime minister Boris Johnson and Biden himself, who swallowed an earlier vow to make the Saudi leadership a "pariah."

German Chancellor Olaf Scholz became the latest major leader to visit the kingdom this past weekend.

Making the crown prince prime minister is an unusual move, but it has happened before.

This scenario is different, "formalizing a de facto situation," said Ali Shihabi, a Saudi analyst close to the government.

"It was overdue actually, since he has been CEO to the King's chairman role for many years," Shihabi said.

The crown prince "has already gone through the power struggle phase and won it over, so what's happening now is more regularization of his authority," said Umar Karim, an expert on Saudi politics at the University of Birmingham.

The move could also resolve thorny questions related to protocol, given Prince Mohammed has for years been meeting heads of state even though his administrative rank has been defense minister, Karim said.

Prince Khalid's promotion "formalizes the key role he has in any case been playing in the ministry since 2019, but also makes the changes look more like a cabinet reshuffle for presentational purposes," said Kristian Ulrichsen, a research fellow at the Baker Institute at Rice University.

MBS is the sole member of the Saudi parliament.