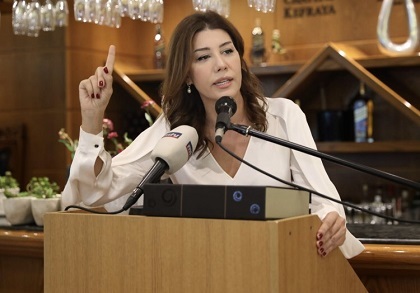 MP Paula Yacoubian of the Change parliamentary bloc has accused the other opposition forces of “turning against the understanding” that both groupings were reportedly working on in a bid to agree on a single candidate for the presidential election.

“Is there a figure that is more sovereign than (ex-MP) Salah Honein? Why don’t they want to go to a reasonable and acceptable solution?” Yacoubian asked, in an interview with Asharq al-Awsat newspaper published Friday.

“They turned against all agreements and made a condition that we endorse the candidate whom they agreed on and who is not consistent with our initiative which calls for a figure that is not part of the political alignments,” the MP added.

“We believe that only such a figure can secure the number of votes that allows the election of a president and can prevent the win of a March 8 figure. Can they secure 65 votes for Michel Mouawad?” Yacoubian wondered.

Lebanese Forces sources responded to Yacoubian’s remarks, saying that what’s important is that “most opposition components have voted for the presidential candidate Michel Mouawad.”

“Based on the principle of democracy, this will open the door to renewed consultations and communication with all these components to stress that the majority wants this orientation,” the LF sources told Asharq al-Awsat.

“Accordingly, all opposition parties and independents must join this sovereign and reformist choice, because it is in the interest of the opposition’s unity,” the sources added.

Is their idea of a "a reasonable and acceptable solution" someone like Nabih Berri, Elias Bou Saab and Najib Mikati, who they help elect?
BTW Salah Honein recused himself that's why they ended up voting for Salim Edde.

She’s still in the March 8 / 14 mindsets… people are beyond this, poverty, famine and despair hit all regions and sects and people no longer speak of March 8 & 14 expect those living in lalaland like these politicians.

This is a classic example as to why THE PEOPLE, must vote directly for a President. Not these bunch of no nothing. They showed the world again that this so called parliament is a school yard full of kids and not a serious institution.

Why put a blank paper. Might as well abstain from voting. Or the idiot who put Mahsa Amini's name. What a nincompoop

I think she just likes the attention...Work and stop talking