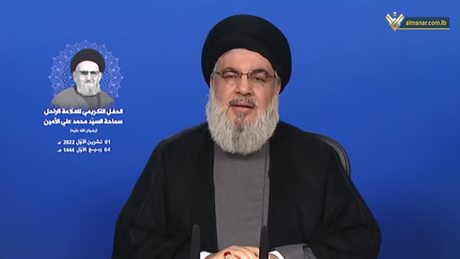 “Thursday’s parliamentary session (for the election of a new president) confirmed that those who want to elect a president for Lebanon must shun the approach of confrontation and the presidents and candidates of confrontation,” Nasrallah said in a televised address.

“How can you build a country with a confrontation president who wants to confront a large part of the Lebanese people who support the resistance and the choice of resistance?” Nasrallah added.

He accordingly called on the political forces to “consult among each other and activate their contacts in the coming period in order to reach a choice the enjoys a majority in parliament.”

Lebanese Forces leader Samir Geagea had repeatedly called for the election of a president who would confront the policies of Hezbollah and the Free Patriotic Movement.

In Thursday’s session, the LF and its allies voted for MP Michel Mouawad, who garnered 36 votes, as Hezbollah, its allies and a few independents cast 63 blank votes. The Hezbollah-led camp is yet to agree on a single candidate and media reports have said that Hezbollah is trying to convince Free Patriotic Movement chief Jebran Bassil to endorse the nomination of Marada Movement leader Suleiman Franjieh.

Turning to the issue of the formation of a new government, Nasrallah said “time has started to run out” but added that he is “still hopeful that a government will be formed in the next few days.”

As for the written U.S. proposal that Lebanon received earlier in the day regarding maritime border demarcation with Israel, Nasrallah welcomed the move as "a very important step."

"The importance of what happened is that there is now a written text," he said.

"The coming days will be crucial," Nasrallah added, as Lebanese authorities prepare their response to an offer that could "open up wide horizons for the Lebanese people."

Nasrallah had repeatedly threatened Israel with attacks if it proceeds with gas extraction in disputed areas before a deal is reached.

“We can extract our resources when we benefit from our strength and unity… When we stand together and use our available elements of strength we can reach good results,” Nasrallah said.

He also noted that the expected deal is not the result of the “generosity” of the U.S. and Israel but rather the result of “Lebanon's strength.”

Lebanon and Israel reopened negotiations on their maritime border in 2020, but the process was stalled by Lebanon's demand that the map used by the United Nations in the talks be modified. The U.S.-mediated negotiations resumed in early June after Israel moved a production vessel near the Karish offshore field, which is partly claimed by Lebanon.

Saturday's delivery of the final draft agreement to Lebanon followed a flurry of statements by Lebanese officials, including President Michel Aoun and PM-designate Najib Mikati, expressing optimism that a deal with Israel was close.

"The Lebanese response will be made as soon as possible, in preparation for the next step," an official at the president's office told AFP on Saturday on condition of anonymity.

Speaker Nabih Berri, who is allied with Hezbollah, also said that the U.S. offer is “positive” and “meets the Lebanese demands.”