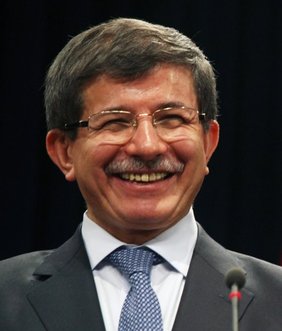 Turkey plans an international conference "as soon as possible" with regional players and world powers to solve the Syrian crisis, its foreign minister said on Wednesday.

"We are determined to establish a broad-based forum to promote international understanding with all countries concerned" with the developments in Syria, Ahmet Davutoglu said in a televised interview.

The conference could take place in Turkey or in another country but it must certainly be "in the region" and "as soon as possible", he added.

Turkey has been trying to create a "new roadmap," on Syria, said Davutoglu, adding that Prime Minister Recep Tayyip Erdogan would speak on the phone with Russian President Dimitri Medvedev on Wednesday.

Later in the day, Davutoglu will fly to the United States for a meeting with U.S. Secretary of State Hillary Clinton for further discussions on the Syrian crisis.

He will also meet U.S. National Security Advisor Thomas Danilon and return to Turkey on Sunday, said a statement from the foreign ministry.

Erdogan on Tuesday gave initial signs of a new initiative on Syria after China and Russia vetoed a U.N. Security Council resolution backed by the West and the Arab League to stop the months-long bloodshed.

"We will start a new initiative with those countries who stand by the Syrian people, not the regime," he said, adding that his government would use all diplomatic means to draw the world's attention to Syria.

Turkey, which has a 910-kilometer border (560 mile) with Syria, has been at the forefront of international criticism against Damascus since an uprising began last March and has become a haven for opposition activists.

So the Turkish idiot who is made by some to be a strategist (and what strategist he turned out to be, more of a kowtowing jerk to the US) thinks that what didn't work at the largest international conference in the world, the UN, will work elsewhere! Talking about a hysteria that has hit these retards.