Qatar's role in diplomacy ahead of 2022 World Cup 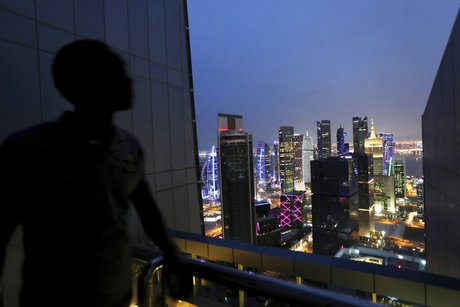 For decades, Doha has flung open its doors to Taliban warlords, Islamist dissidents, African rebel commanders and exiles of every stripe.

Now, the tiny emirate is receiving extra scrutiny as it welcomes over a million soccer fans from around the world for the 2022 World Cup.

Qatar's quest for global influence ranges wide and runs deep. Flush with gas billions, the country has sought to mediate conflicts far afield but its brazen stances have also sparked diplomatic conflict back home. Three Gulf Arab neighbors, along with Egypt, severed ties with Doha in 2017, accusing it of financing terrorism and harboring fugitive dissidents.

Qatar denies the charges, but there's no doubt the emirate has pursued contrarian policies.

Here's a look at the country's outsized role in diplomacy around the world.

The Taliban opened a political office in Doha in 2013, with Washington's consent. The insurgents made their home in the stylish capital. Qatar's Islamist leanings and close ties with the group ultimately proved vital as Doha played host to American diplomats and Taliban officials seeking to end America's longest war. Amid the United States' frantic airlift out of Kabul last year, Qatar stepped up again. It received nearly half of all Afghan and American evacuees — more than any other country, winning praise from President Joe Biden. Now, Qatar has a key role as interlocutor between Afghanistan's new rulers and the West.

Unlike its Gulf Arab neighbors, Qatar is sympathetic to political Islam. In the early days of the 2011 Arab Spring uprisings, it bet on Islamists across the region. In Egypt, Qatar and its Al Jazeera satellite news network backed the former democratically elected but divisive president who hailed from the Muslim Brotherhood. After the military-backed ouster of Mohamed Morsi, Qatar gave his supporters sanctuary. Qatar also backed powerful Islamist militias as wars erupted in Libya and Syria. That triggered accusations that Qatar was bankrolling terrorists. But Doha's ties with militant groups have sometimes proved important to the West, which has used them to negotiate hostage releases in countries like Syria. While Qatar enjoys a reputation as a safe haven for Islamic militants and other assorted strays, it has seen violence in the past. Former Chechen separatist leader Zelimkhan Yandarbiyev, who was living in exile in Doha, was killed in a car-bombing in 2004.

Qatar openly provides a base for leaders of Hamas, the Palestinian militant group that rules the Gaza Strip. After the 2007 split between feuding Palestinian factions Fatah and Hamas, Qatar sought to mediate an end to the — still ongoing — rivalry. Doha also has low-level ties with Israel, cooperating with the country to provide badly needed aid to impoverished, blockaded Gaza. The Qatari payments to Gaza have been used to buy fuel, pay civil servants' salaries and provide cash to needy families. Qatar has also been key to negotiating cease-fires between Israel and Hamas that have restored calm after four wars — the most recent in 2021 — as well as countless smaller skirmishes.

Qatar has served as a mediator between Chad's military government and rebels groups as the African nation struggles with the aftermath of the 2021 killing of its longtime President Idriss Deby Itno, who had ruled the country since 1990. Deby's 38-year-old son, Mahamat Idriss Deby, now leads the junta. In August, Chad signed a pledge in Qatar with over 40 rebel groups and opposition figures ahead of planned national reconciliation talks. However, the Front for Change and Concord in Chad, the main rebel group in the country blamed for killing Deby's father, did not sign the pledge. It remains unclear if the pledge will be enough to ensure the success of the talks as a planned 18-month transition from military rule to democracy winds down. Elsewhere in Africa, Qatar helped mediate an end to a diplomatic standoff last year between Kenya and Somalia, which were at odds over several issues, including oil-rich waters in the Indian Ocean.

Qatar sits just across the Persian Gulf from Iran and shares its massive offshore natural gas field with Tehran. That's required Doha to maintain good relations with the Islamic Republic. While Oman has long served as an intermediary between the U.S. and Iran, Qatar recently hosted indirect talks between Iran and America over Tehran's tattered nuclear deal. Its high-level ties also see top officials from both countries hold telephone conversations amid the nuclear negotiations. Al Jazeera covers Iran intensely and often sympathetically. Separately, Qatar has beefed up its own military and hosts the forward headquarters of the U.S. military's Central Command.