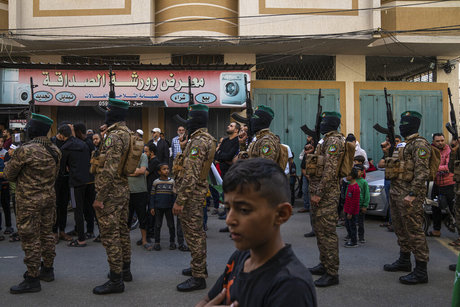 Two Israelis were killed Tuesday in an attack in the occupied West Bank, with the Palestinian perpetrator shot dead, Israeli and Palestinian officials said.

The latest surge in violence comes hours before Israel swears in its new parliament, with far-right lawmakers poised to be members of the cabinet vowing a crackdown on Palestinian violence.

"Following the initial report regarding a stabbing attack near the Ariel Industrial Zone, a terrorist arrived at the entrance gate of the zone and stabbed civilians in the area," a statement from the army said.

"Other civilians were stabbed at a nearby gas station. The terrorist fled the scene and was neutralized afterwards," the statement said.

The Palestinian health ministry issued a statement about a man shot dead by Israeli forces at the site, without providing further details.

According to Israeli media, the perpetrator escaped the scene in a car, driving against traffic and ramming into a vehicle, before escaping by foot.

Israeli emergency medical service Magen David Adom said two people were pronounced dead, a 35-year-old man due to a stab wound at the Ariel industrial zone, and a 50-year-old on a nearby highway as the result of a car accident.

Three other people with stab wounds, one critical and two seriously wounded, were being taken from the industrial zone to a hospital in Petah Tikvah, MDA said.

Another man who was stabbed on the highway was taken to the same hospital in serious condition, according to MDA.

Outgoing Israeli Prime Minister Yair Lapid sent his condolences to the bereaved families, and said that while security forces have managed to dismantle large militant infrastructures, "we have to fight this battle every day anew."

The November 1 election saw Lapid and his allies lose the majority to form a coalition, with former premier Benjamin Netanyahu and his partners securing 64 seats of the 120-member parliament.

Betzalel Smotrich, head of the far-right Religious Zionism party, which is set to become a key partner in the coalition Netanyahu is putting together, said Tuesday's attack was a "painful reminder to the most urgent topic on our table."

"We must bring back security to all Israelis," he wrote on Twitter.

Violence in the West Bank has soared since March, as Israel has launched near daily raids in response to series of deadly attacks on Israelis.

On Monday, Israeli forces shot dead a Palestinian teenager near Ramallah after the car she was travelling in sped towards soldiers.

Israel has occupied the West Bank since the Six-Day War of 1967.