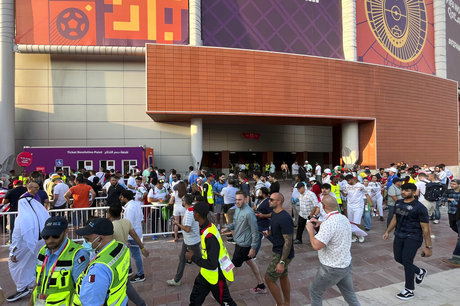 Problems with FIFA's mobile application for World Cup tickets caused hundreds of fans to miss the start of England's match against Iran on Monday.

Fans said their tickets had disappeared from their phone apps and lines began to form outside the Khalifa International Stadium about an hour before the 4 p.m. kickoff in Doha.

Although some fans had their ticket purchase verified with email checks, others appeared to have been sent into the stadium without further checks.

The lines cleared at a ticketing help desk about 30 minutes into the game. It was unclear if each ticket holder's problem was resolved or if fans had simply been sent in to see the game.

"All the tickets I have have disappeared," Avinash Fernando of Sri Lanka told The Associated Press.

He and a friend, Chathura Perera, each had seven tickets for the tournament vanish.

Another fan, who gave only his first name Farhood, said his tickets had gone.

"I don't have them anymore on the app. It might have been a hacker, I'm not sure," he said.

FIFA acknowledged in a statement that "some spectators are currently experiencing an issue with accessing their tickets."

"The issue is no tickets on the app," England fan John Eastern told the AP. "I'm not sure I'll get in."

While the fans were waiting outside, play had stopped for about seven minutes to deal with Iran goalkeeper Alireza Beiranvand's facial injury. He continued playing briefly but then was substituted.

As the kickoff approached, FIFA advised fans to check the inbox of the email account they used to register with the ticketing app.

"In case fans cannot access their email accounts, the stadium's Ticket Resolution Point will be able to support," FIFA said.