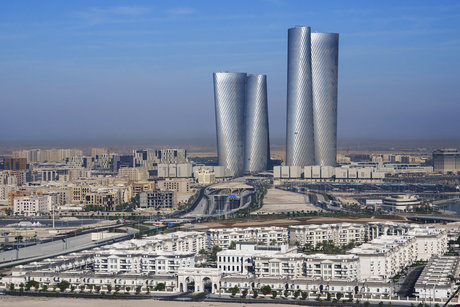 Less than a month before it is set to host the World Cup final, Lusail City is oddly quiet.

But with soccer's biggest event underway, the empty futuristic city is raising questions about how much use the infrastructure Qatar built for the event will get after more than a million soccer fans leave the small Gulf Arab nation after the tournament.

Elias Garcia, a 50-year old business owner from San Francisco, visited Lusail City from Doha with a friend on a day when there wasn't a soccer game in the city's bowl-shaped, golden stadium.

"We came to check it out but there's not much here," Garcia said, looking up at a huge crescent-shaped skyscraper behind him designed to look like the curved swords on Qatar's national emblem.

Across the street, a building site was concealed by a low fence illustrated with desert scenes. "Everything looks like it's under construction," Garcia said. "It's just empty lots with little walls they put up to make you think it's up and running."

Driving north from Doha, Lusail City's glittering skyline and marina are hard to miss. Pastel-colored towers that look like crates stacked on each other rise from the desert. Wide avenues give way to zigzagging buildings, glass domes and clusters of neoclassical housing blocks. It's unclear if anyone lives in them. Most are advertised as luxury hotels, apartments or commercial office space. Cranes hang above many buildings.

Plans for Lusail City had been around since 2005 but construction was fast-tracked after Qatar won the rights to host the World Cup five years later. Backed by Qatar's $450 billion sovereign wealth fund, the city was designed to be compact and pedestrian friendly and is connected by Doha's new metro and a light rail.

Officials have also said the city is part of broader plans that natural gas-rich Qatar has to build its knowledge economy — an admission of the type of white-collar professionals the country hopes to attract to the city long-term.

But reaching its goal of housing 400,000 people in Lusail City could be tough in a country where only 300,000 people are citizens, and many of the 2.9 million residents are poor migrants who live in camps, not luxury towers.

Even during the World Cup, Lusail City is noticeably quieter than Doha, itself the site of jaw-dropping amounts of construction over the past decade in preparation for the event.

At the Place Vendome, a luxury mall named for the grand Parisian square, many stores are not yet open. A few tourists snapped pictures of Lusail City's skyline on a recent afternoon from the mall while cashiers talked among themselves. At a building downtown housing the Ministry of Culture and other government offices, a security guard said almost everyone had left by 11 a.m.

"Even on the metro, if you go on a day when there's not a match, there are like five to 10 people on it besides you," Garcia said.

On the man-made Al Maha Island, a crowd of World Cup fans and locals lounged at an upscale beach club, pulling on shisha tobacco pipes and dipping into a swimming pool.

Timothe Burt-Riley directed workers at an art gallery opening later that night. The French gallery director said Lusail City – or at least Al Maha Island with its amusement park, high-end boutiques, restaurants and lounges, would be a place where locals come to meet.

"This is a totally man-made island," Burt-Riley said, "it's pretty crazy what they can do."

He said Qatar could find a way to make use of the infrastructure it's built for the World Cup, including seven new soccer stadiums, but admitted, "it might take time."