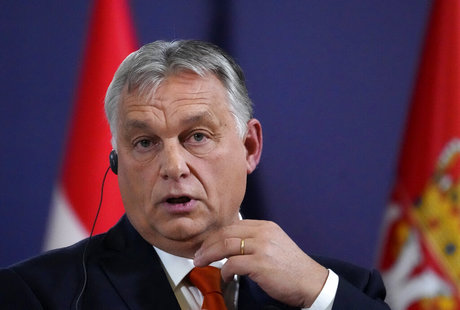 Hungary's prime minister said Friday that he will continue to oppose a European Union plan to provide an 18-billion-euro ($19-billion) aid package to Ukraine in 2023, a position that promises sustained tensions as the bloc and the nationalist Hungarian government wrangle over democratic standards.

In an interview on state radio, Prime Minister Viktor Orban acknowledged that Ukraine needs help to pay for the functioning of essential services but emphasized that he would block the EU's plan of joint borrowing to fund the package.

"The question is how to help Ukraine," Orban said. "One proposal says that we should use the budgets of the EU member states to take out new loans together and use that money to give to Ukraine. We are not in favor of this because we do not want the European Union to become a community of indebted states instead of a community of cooperating member states."

Orban proposed that each of the EU's 27 member states draw from its own budget to provide assistance to Ukraine through bilateral agreements.

"We will not accept the other plan, we will not consent to it, without us it will not come into being," he said.

Orban earlier indicated that Hungary would be willing to provide Ukraine with 60-70 billion forints ($152-$178 million) from its own budget on bilateral terms — an amount he said would not fundamentally harm Hungary's national interests.

The aid package to Ukraine is one of several top priorities for the EU that Hungary's government has blocked or delayed in recent months. Some officials in Brussels suspect that Budapest is using its veto of the aid package, as well as its opposition to the EU signing onto a minimum corporate tax rate, as leverage to pressure the bloc to release billions in funding it has withheld from Hungary over rule of law and corruption concerns.

On Wednesday, the EU's executive arm said it would keep recommending a freeze on 7.5 billion euros ($7.9 billion) in funding to Hungary until it carries out a raft of reforms, including shoring up judicial independence, protecting EU funds from corruption and increasing legislative transparency.

The EU's 27 nations have until Dec. 19 to decide on the European Commission's proposal. The Hungarian government has shown a willingness to carry out the requested reforms to access the badly needed funds as Hungary's economy struggles with a volatile currency and a 21.1% annual inflation rate — the third highest in the bloc.

Yet efforts in Brussels to bring Hungary into line with the EU's democratic standards have not led to a more conciliatory posture from Budapest on many issues. On Friday, Orban blasted the EU's sanctions against Russia over the invasion of Ukraine, blaming them for skyrocketing prices. He referred to EU officials pushing for sanctions as being "on the side of war."

Hungary has also delayed the ratification of Sweden and Finland's bids to join NATO. It is the only member of the 30-member military alliance besides Turkey not to have voted for approval. Last week, Orban promised that Hungary's legislature would hold a ratification vote early next year.

The Hungarian government has also opposed EU efforts to pass a 15% minimum corporate tax rule, a proposal which requires unanimous support from the bloc's members. Orban said Friday that he would keep blocking the measure, describing it as a "job-killing tax increase" which "would lead to the loss of tens of thousands of jobs. We cannot afford this in Hungary."