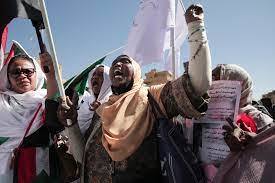 The past year has seen near-weekly protests and a crackdown that pro-democracy medics say has killed at least 121, a spiraling economic crisis exacerbated by donors slashing funding, and a resurgence of ethnic violence in several remote regions.

Divisions among civilian groups have deepened since the coup, with some urging a deal with the military while others insist on "no partnership, no negotiation".

The deal was signed by Burhan, paramilitary commander Mohamed Hamdan Dagalo and multiple civilian groups, most notably the Forces for Freedom and Change (FFC) -- the main civilian faction that was ousted in the coup.

As the key players put pens to paper, hundreds of citizens rallied in Khartoum to protest against the deal.

"The settlement is betrayal" and the FFC "sold our blood," demonstrators cried.

"We reject this deal as it overlooked street demands for justice for the people killed since the coup," said one of those protesters, Mohamed Ali.

If the deal plays out as planned, the civilian signatories will agree on a prime minister who will steer the country through a 24-month transition.

"The ceremony today is a culmination of the sustained efforts of Sudanese stakeholders over the past year to find a solution to the political crisis and restore constitutional order," said UN special representative Volker Perthes.

The initial deal was described as "welcome" by the United States, Britain, Norway, Saudi Arabia and the United Arab Emirates -- all key players in Sudan -- in a joint statement by the U.S. State Department.

During the signing ceremony, Dagalo reiterated the military's purported commitment to exit the political scene, saying "it is essential to build a sustainable democratic regime."

Other signatories included the Islamist Popular Congress Party, a faction of the Democratic Unionist Party and some ex-rebel groups who signed a 2020 peace deal.

The agreement -- based on a proposal by the Sudanese Bar Association -- was negotiated in the presence of officials from the U.N., Western diplomats as well as Saudi Arabia and the United Arab Emirates, according to the FFC.

Perthes urged Sudanese factions to "immediately" start the second phase to resolve the outstanding issues and reach a comprehensive deal.

However, that part is far thornier, with observers questioning whether the military would be willing to give up economic interests -- as stipulated -- and wider powers that it views as its privileged domain.

Phase one of the deal "is a very low level commitment on Burhan's part... allowing him to survive" politically, said Kholood Khair founder of the Confluence Advisory, a Khartoum-based think-tank.

But the signatories will likely face "a real political crisis as they start talking in earnest about security sector reforms, transitional justice (and) financial accountability," she added.

Monday's signing comes months after Burhan pledged that the military would step aside and make way for factions to agree on a civilian government.

Some of the former rebels who signed peace deals with Sudan in 2020 also voiced their opposition to Monday's agreement.

Mohamed Zakaraia, spokesman for former rebel group the Justice and Equality Movement, told AFP that it "will bring about dire consequences and further complicate the political scene."