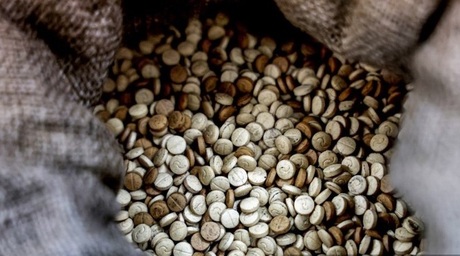 A Lebanese court has handed a man known as the "Captagon King" a seven-year sentence with hard labor for producing and trafficking the illegal drug, a judicial source told AFP.

This is the first time a major drug baron is convicted in a captagon case in Lebanon.

Hassan Dekko, a Lebanese-Syrian drug kingpin with high-level political connections in both countries, is accused of once running an empire out of a Lebanese border village in the notoriously lawless Bekaa region.

"Dekko was handed seven years of hard labor and convicted of manufacturing captagon pills, and smuggling them abroad," said the judicial source.

The Beirut court that issued the verdict is not taking part in a nationwide judges' strike that has paralyzed the judiciary since August.

Most of global captagon production originates in Syria, spurring an illegal $10 billion industry, according to estimates drawn from official data by AFP, making the drug the country's largest export by far.

In court documents obtained by AFP, Dekko denied any involvement in drug trafficking, claiming he worked with the Syrian military.

But Lebanese security sources claim that some of the businesses he owns, including a pesticide factory in Jordan, a car dealership in Syria and a fleet of tanker trucks, are common covers for drug lords.

The court found that Dekko was in contact with drug smugglers in Syria and that he asked one of the defendants in the same case to purchase materials used to produce captagon pills.

But the investigation showed he purposefully failed to inform them about other shipments, the source said.

Twenty-five others, including three of Dekko's brothers, were sentenced to hard labor for life in absentia.

Lebanese authorities have ramped up efforts to counter captagon production and trafficking after backlash from conservative Gulf nations, key markets for shipments of the amphetamine-type narcotic.

Saudi Arabia is the largest market for captagon, a versatile drug popular among the partying elite but also used for weight loss and by students working several jobs.

@A Lebanese court has handed a man known as the "Captagon King" a seven-year sentence with hard labor for producing and trafficking the illegal drug, a judicial source told AFP.
Seven years in Tibet!