125 Civilians Killed in Syria, Including 68 in Homs Region 'Massacre' 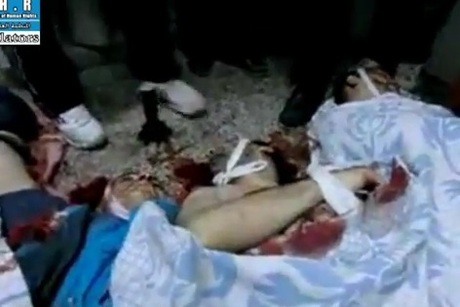 Syrian security forces and pro-regime gunmen killed 125 people across the country on Monday, among them 68 in a "massacre" in the rebel central province of Homs, activists and a rights group said.

"Sixty-eight civilians were killed today in the western countryside of Homs, in a rural area between the villages of Ram al-Enz and Ghajariyeh, and were taken to the state hospital in the city of Homs," said Rami Abdul Rahman, head of the Syrian Observatory for Human Rights.

According to Abdul Rahman, "the Observatory received information indicating that the victims were residents displaced from the city of Homs" which has been bombarded by regime forces for 24 straight days.

"They were killed by 'shabiha' (pro-regime gunmen)," according to the reports received by the Observatory, Abdul Rahman said. "But we cannot confirm or deny this information."

The Observatory called for an independent investigation into the killings which the group labeled a "massacre."

The Local Coordination Committees, a network of activists, also reported a massacre in the Homs region.

A statement from the group said that "64 people who were trying to flee the bombardment in Baba Amr (district of the city of Homs) were killed at a security checkpoint in the Abel region of Homs."

Earlier on Monday, an Agence France Presse journalist said the Syrian army shelled Qusayr in an effort to regain control of the town in the mostly rebel-held central province of Homs.

Rocket and shell blasts as well as light arms fire could be heard at regular intervals around the town of more than 40,000 inhabitants.

Qusayr is located some 15 kilometers from the city of Homs where the army has been pounding rebel-held districts with shells and mortar fire since February 4.

"We have rocket-propelled grenades but mostly Kalashnikovs (assault rifles)," said an officer in the rebel Free Syrian Army who deserted from the intelligence services.

According to the FSA, some 35 army tanks are stationed around Qusayr, and another 200 around Homs. An AFP reporter saw a drone circling over the town, while early in the evening gunfire could be heard intermittently.

A doctor running a makeshift hospital at a secret house said he did not receive any casualties on Monday.

"This is a miracle," said the man who goes by the pseudonym of Dr. Nasser.

"The Syrian army has been deployed inside the state hospital for the past five months. There are only tanks and soldiers," he said, adding that supplies of oxygen and anesthetics were totally lacking.

According to FSA fighters, contact with the city of Homs has been severed.

A tunnel used by rebels to infiltrate the town has been destroyed by loyalist troops, they said.

The Observatory said explosions shook the Homs neighborhoods of Hamidiyeh, Bustan al-Diwan, and the city center.

Two people were killed when a rocket fired by regime troops hit a car in which they traveled in the village of Talheya, in the northern province of Idlib, the Observatory said.

Eight civilians were wounded as troops shelled the town of Sarmeen, also in Idlib, according to the watchdog.

And in Rastan, in Homs province, 20 civilians were wounded in a huge blast that was heard across the city, it added.

Elsewhere, pro-regime gunmen known as Shabiha chased students staging a sit-in at the University of Aleppo's faculty of dentistry, the Observatory said. Gunshots were later heard at the university campus where demonstrators were trapped in halls of residence, while 16 were arrested, it added.

In the central Hama province, military forces reportedly stormed the village of Khatab.

Qatar's prime minister said Monday he was in favor of delivering arms to the Syrian opposition that is battling President Bashar al-Assad's regime.

"We should do whatever necessary to help them, including giving them weapons to defend themselves," Sheikh Hamad bin Jassem al-Thani said during an official visit to Norway.

More than 7,600 people have been killed in violence across Syria since anti-regime protests erupted in March 2011, according to the Syrian Observatory for Human Rights.

But U.S. Secretary of State Hillary Clinton on Sunday warned against the arming of rebels in Syria because such a move could inadvertently lead to support for al-Qaida and Palestinian Islamist group Hamas.

This sounds like the work of Hezz and Iranian shabiha.

They did the same thing in Lebanon in the 80's.
The Syrians killed thousands of Lebanese also.

this is what M8 people support...

30 years of this lebanon has been witness to. All from this regime. Yet somehow HA is still in bed with them. That's how you know HA and m8 are scum.

May God help the Syrian people. Anyone who supports Aoun is a fool.

ya latif, the pictures are horrifying. Allah yir7amon.

what great news,there nothing like seeing what these scums get back for everything they did to lebanon,and before all you Tree huggers out there say we must forgive ill forgive when i see SYRIA on fire!thank you

Where was the syrian opposition, when Lebanon was slaughtered. It is ok, let them feel what we felt for many years. 11 months is nothing.

chris 11 months im hoping for another 99 years and 1 month.

YOU are getting desperate...