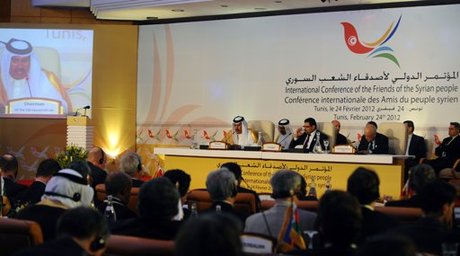 Russia said on Monday that the "Friends of Syria" meeting in Istanbul at the weekend contradicted the objective of reaching a peaceful settlement that could end more than a year of bloodshed.

"The promises and intentions to deliver direct military and logistical support to the armed... opposition that were voiced in Istanbul unquestionably contradict the goals of a peaceful settlement to the civil conflict in Syria," the foreign ministry said in a statement.

Western and Arab nations called Sunday for Syrian President Bashar Assad to be set a deadline to meet the terms of a peace plan advanced by international mediator Kofi Annan.

The meeting also recognized the opposition Syrian National Council (SNC) as the "legitimate representative" of all Syrians and the "leading interlocutor for the opposition with the international community."

The SNC then announced plans to pay the salaries of Free Syrian Army (FSA) fighters while nations such as Saudi Arabia and Qatar agreed to pay several million dollars to fund the FSA.

Russia abstained from attending the conference and said Monday that it had turned out to be as "one-sided" as Moscow had feared.

"Unfortunately, the meeting in Istanbul was as one-sided" as previous such gatherings, the foreign ministry statement said.

"Its list of participants did not include either the Syrian government or many of the influential groups of the Syrian political opposition," it said.

Russia also reaffirmed its support for Annan's initiative and said it would continue "trying to achieve an immediate ceasefire and an end to violence from all sides".

How become an advisor to the Syrian peace fighters?