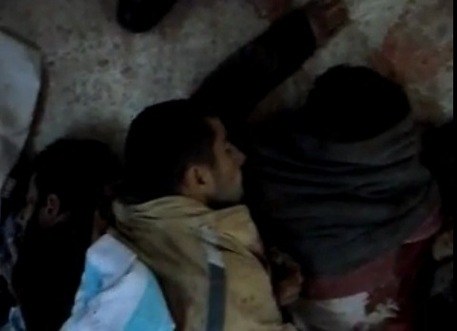 Fierce clashes broke out between Syrian troops and rebels on Tuesday as the regime sent reinforcements into a number of hotspots despite President Bashar al-Assad's pledge to implement a peace plan.

The Syrian Observatory for Human Rights said fighting gripped several parts of the country including the southern province of Daraa, northwest Idlib province, Homs in central Syria and near the capital.

At least 18 civilians were killed in the fighting along with seven soldiers and four rebels, the Britain-based group said.

In Daraa, cradle of the one-year uprising against Assad's regime, fighting erupted overnight in the town of Inkhel after rebels attacked army checkpoints.

In the same region, dozens of troop carriers arrived in the town of Dael, where the army carried out raids and arrests the day before.

Sayyed Mahmoud, an activist in Daraa reached by Skype, told Agence France Presse the situation was extremely tense in the town.

"They burned down 14 houses yesterday. They are arresting people and have sent in troop reinforcements," he said.

"As part of the regime's campaign to starve the people, troops are raiding homes, destroying food stocks and equipment. They go into bakeries and destroy the dough. There are 15-hour power cuts a day."

In Idlib, heavy fighting took place on the outskirts of the town of Taftanaz, where five civilians, four rebels and seven soldiers were killed amid heavy machinegun fire and shelling, the Observatory said.

In Damascus province, fighting was reported in the towns of Douma and in Zabadani, where the army was carrying out arrests and raiding homes.

In central Homs, nine civilians were killed in shelling of several neighborhoods of the city and two others died in fighting elsewhere in the province.

The latest unrest came as Red Cross chief Jakob Kellenberger was on a fresh mission to Syria -- his third since last year when Damascus launched a crackdown on anti-government protests that the U.N. says has left more than 9,000 dead.

Annan told the U.N. Security Council that Assad had agreed to "immediately" start pulling troops out of protest cities and complete a troop and heavy weapon withdrawal by April 10.

But Amnesty International cast doubt on the Syrian regime's commitment to stop the bloodshed, saying that arrests were continuing despite the pledge made to Annan.

"Arrests have been continuing in Syria only days after the Syrian government agreed to implement parts of Kofi Annan's six-point plan," the rights group said in a statement.

"Thirteen school pupils, all male and aged between 17 and 19, were reportedly arrested on April 1 by men in plainclothes at a secondary school specializing in business in the town of Daraya," in Damascus province, it added.

Amnesty said the students were searched, beaten and verbally abused in front of their classmates and that their families had no information on their whereabouts.

"There are thousands of people still in detention across Syria, many held incommunicado, in danger of being tortured, and without access to lawyers," said Ann Harrison, Amnesty International's Middle East and North Africa deputy head.

"Continuing to hold people in such conditions, and making new arrests like this, raises serious questions about how serious the government is about respecting its commitments under the Annan plan."