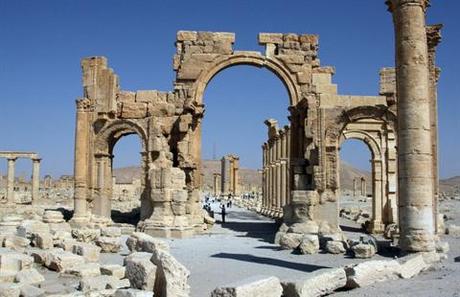 Syria's year-long revolt has exposed to looting and destruction the country's archaeological treasures, including the ancient city of Palmyra and the Greco-Roman ruins of Apamea, experts warned Thursday.

Most vulnerable are strife-torn areas that have fallen outside the full control of the regime where looters have already targeted museums, excavation sites and monuments, they said.

"In the past three to four months there has been a lot of looting," said Hiba al-Sakhel, director of museums in Syria.

"In Apamea, we have a video showing looters removing mosaics with drills," she told Agence France Presse. "And in Palmyra there is a lot of looting and clandestine digging."

Sakhel said other historical sites across the country have fallen prey to looters who are taking advantage of the violence that has swept the country for more than a year to pilfer antiquities.

She said although the practice has been ongoing for years, the pace has increased as a result of the unrest, which has left many sites unprotected and inaccessible.

"Syria has not been fully searched by archaeologists so wherever you dig you make a find," Sakhel said. "I believe those doing the looting are locals drawn by profit and who care little about the importance of the country's heritage."

According to experts, thieves have already made off with items from the museum in the central city of Hama, including antique weapons and a statue dating back to Aramaic times.

Further northwest, the historical Citadel of Shayzar, overlooking the Orontes River, has been damaged while in Apamea, a Roman marble statue has been stolen from the museum and looters have been busy pillaging the sprawling site at night, the experts say.

They add that stolen pieces are probably smuggled through Lebanon and other neighboring countries and then sold on the black market.

Videos posted on YouTube also show the Citadel of al-Madiq, in Apamea, being shelled during fighting between regime forces and rebels.

The ancient city of Ebla, located in Idlib province, site of fierce clashes between regime forces and rebels, has also been exposed to looting.

At the Krak des Chevaliers, considered a crown jewel of Crusader castles and a top tourist attraction, guards have been unable to enter the site due to it being occupied by armed men, Sakhel said.

Michel al-Maqdissi, head of archaeological excavations in Syria, said most at risk is the northern so-called Limestone Massif region that is home to hundreds of convents, monasteries and ancient churches.

"In my opinion this is the most vulnerable and exposed region right now because it is outside the direct control of the antiquities department," Maqdissi told AFP.

The United Nations' cultural agency UNESCO last month urged member states and international bodies to safeguard Syria's rich cultural heritage and ensure it is not pilfered and sent abroad amid the violence gripping the country.

"Damage to the heritage of the country is damage to the soul of its people and its identity," director general Irina Bokova said in a statement.

Six Syrian sites -- Damascus, Aleppo, Palmyra, Bosra, the Krak des Chevaliers and Saladin's Castle, the ancient villages of northern Syria -- are inscribed on UNESCO's World Heritage list and many more are on the agency's tentative list.

Marc Griesheimer, head of the department of archaeology and antiquities at the French Institute of the Near East in Beirut, said Syria's archaeological sites were exceptional in that they bear witness to the evolution of mankind.

"What is fascinating in Syria is that, along with Mesopotamia, the country reflects the main advances made by humankind, ... meaning the birth of the first villages or the evolution from the state of predator to sedentism," he said.

Sakhel said authorities have started removing precious objects from museums to protect them from thieves or destruction and a plan was underway to place them at the Central Bank.

"I hope the international community will send a message to the Syrian people to tell them that it is our heritage that is at stake," she said.

"So it must not be destroyed even if one is demanding 'freedom'."