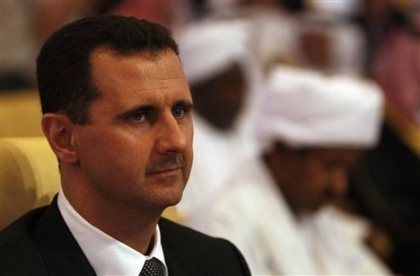 The refugees accused Assad, who is the supreme commander of the Syrian Army and armed forces, and his accomplices of committing “murders, war crimes, genocides and crimes against humanity” in Syria since the March 2010 uprising against the regime.

“Over a year ago, peaceful protests kicked off in Syria demanding freedom and democracy… But Assad gave instructions to the army to launch a crackdown on protesters and to commit mass murder and massacres which caused the death of 12,000 unarmed Syrian people,” the refugees said in their complaint.

According to al-Anba, the complaint was supported with evidence including videos, filmed confessions, photos, witness statements and written documents to prove the validity of these crimes.

Lebanese lawyer Tariq Shandab, who is head of the legal center to protect the rights of refugees and one of the lawyers representing the Syrian refugees, said that “the complaint was supported with valid evidence… that condemns the regime.”

He told al-Anba that the “crimes committed by the Syrian regime are far more dangerous than those committed by former Libyan leader Moammar Gadhafi.”

Shandab stressed that the legal suit will be followed up legally “until the victims and their families receive their rights and justice is fully achieved.”

According to the U.N. refugee agency, UNHCR, there are around 16,000 Syrian refugees in Lebanon.

If they were doing it, they would have been shooting on all those that collaborated with Assad regime during that time, ie hariri ... joumblatt ... and all those that sold lebanon from 1976 till 2005 (syrian occupation period)

Next, this lawyer will be assassinated by the EVILs who are paid to remain armed and act as the agents in Lebanon or else the Iranian money and weaponry will not make it home.