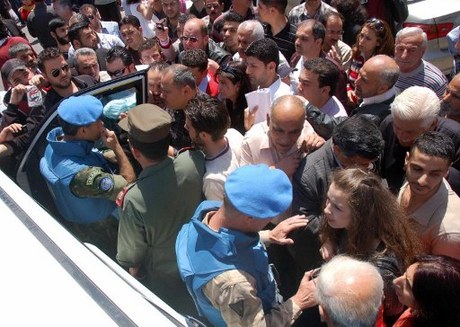 Syria is still seeing "unacceptable" levels of violence, international envoy Kofi Annan told the U.N. Security Council on Tuesday, after dozens of people were killed across the country despite a ceasefire.

"The situation in Syria continues to be unacceptable," Annan told a closed-door meeting. He spoke after a car bomb rocked central Damascus, wounding three people, while nearly 60 people were killed across the country a day earlier ahead of the deployment of 300 U.N. peace observers.

Earlier on Tuesday, Annan's spokesman said the Syrian government has not yet removed heavy weapons used to quash anti-regime protests as agreed in a U.N. ceasefire.

Spokesman Ahmad Fawzi said the truce was "extremely fragile" and urged President Bashar al-Assad's government to fully implement its end of the deal.

"This means withdrawal of all heavy armory from population centers," he told U.N. broadcaster UNTV.

"They are claiming that this has happened. Satellite imagery however and credible reports show that this has not fully happened, so this is unacceptable."

He said Annan, the U.N. and Arab League envoy for the crisis, planned to denounce the regime's failure to comply with the ceasefire in an address to a closed session of the U.N. Security Council later Tuesday.

He also said U.N. observers on the ground had entered areas like Homs and Hama and found that when they are there "the guns are silent". But when they leave, he said, "credible reports" indicate that fire resumes.

Fawzi's remarks came a day after nearly 60 people were reported killed across Syria despite the cease-fire and the upcoming deployment of 300 U.N. peace monitors.