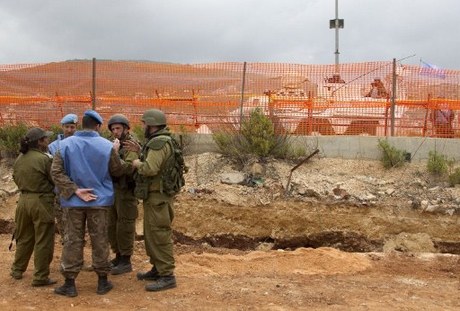 An Israeli military unit crossed on Friday the Blue Line near the area of al-Shahil in Shebaa.

Al-Manar television reported that a shepherd in the area escaped a kidnapping attempt by Israeli troops.

The seven-member unit crossed the Blue Line from their location at Jabal al-Sidanah and infiltrated Shahil where they took up combat positions among a flock of sheep belonging to a shepherd who was nearby.

An Indian unit from the United Nations Interim Force in Lebanon soon arrived at the scene, while the Lebanese army also closely monitored the situation.

On Thursday, Israeli troops crossed the Blue Line while constructing the border wall that they started building on April 30.

The National News Agency reported that the forces crossed 65 centimeters into Lebanese territory near Kfar Kila as they were attempting to expand the border wall beyond the measurements that had been agreed upon.

Lebanese land became open for Syrian and Israelian military due to the weak Lebanese government response.

Maybe they just like sheep a little too much.

The sheep that is selling us forcibly its sour and bitter milk for years now has a name: Mumana3a. It has a Shepherd and a Mou3aun shepherd who get ther clean fodder of tanbac 3ajami which they mix with rotten straws from the lion's bed at Qassioun Zoo..

Now this is a good and humorous comment. He escaped, but what happened to his herd. Were they kidnapped and barbequed? lol

We should place lots of pigs on the border between Lebanon and israel.

In this way, our muslim population wont come near it, and the jews will stay away.

LOL ... inno seriously ... what kind of a story is this? if this unit really wanted to capture this shepard they would have done so ... unless the shepard was Jack Bauer in disguise ... then that would be a story to report. otherwise, this is just waste of cyber space.

Ulpianus ... amazing comment btw, I love the way you think