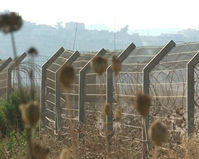 A Lebanese army team in cooperation with the United Nations Interim Force in Lebanon set demarcation points in the border town of Kfarkila to prevent Israel from infringing on Lebanese territories, An Nahar daily reported Friday.

The newspaper said that the move was aimed at preventing the Israeli army from encroaching on Lebanese land while constructing a one-kilometer-long separation wall.

The Israeli army will now resume the construction work after the U.N. peacekeepers ordered it to halt the works earlier in the week following Lebanese army objections that the workers had dismantled the barbed wire fence without replacing it with anything else.

An Nahar said the Lebanese army-UNIFIL team inspected the Blue Line and put the demarcation points that force Israel to fix an 80-centimeter deviation that violates Lebanese sovereignty.

Join the group on facebook--------)Lebanese Sovereignty

"that force Israel to fix an 80-centimeter deviation that violates Lebanese sovereignty."

but all the infringements of lebanese soil from syria, which are far more than 80 cm, are never pointed out...

double standards as usual! and neither hezb nor fpm says a thing against that...

because they are serving their masters!!!!!!!!!

don t deny the facts FT and stop being blind... reports were made about this....just educate yourself

that's the difference between March 8 and March 14