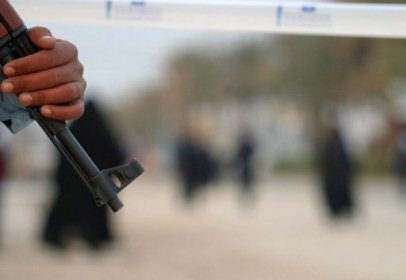 Security agencies succeeded in the past few days in uncovering a terrorist network with local, Arab, and European links, reported al-Joumhouria newspaper on Tuesday.

It said that the confessions of one of the detainees led to the arrest of Sunni Islamist Shadi al-Mawlawi, a development which sparked armed clashes in the northern city of Tripoli over the weekend.

The six-member network includes three Lebanese individuals and a national from each of Qatar, Palestine, and Jordan.

They have each been arrested at various times in the past in Lebanon, added al-Joumhouria.

Sources told the newspaper that this was the first time in Lebanon that an entire network is arrested.

Military Tribunal Judge Saqr Saqr had charged on Monday al-Mawlawi and the five other network members with forming an armed terrorist group and undermining the authority of the state, as well as having links to the al-Qaida.

He later issued an arrest warrant against al-Mawlawi.

Prominent security sources told As Safir newspaper on Tuesday that the General Security Department took the initiative to arrest al-Mawlawi given the evidence against him.

Investigations with him soon proved the department right as he confessed to the charges against him, added the sources.

They revealed that a European power contributed information on al-Mawlawi’s terrorist activity outside of Lebanon.

Al-Mawlawi was arrested on Saturday after the General Security Department lured him to an office at Finance Minister Mohammed al-Safadi’s welfare association in Tripoli.

His arrest sparked clashes between the rival Tripoli neighborhoods of Bab al-Tabbaneh and Jabal Mohsen.

Some opposition officials have accused the General Security of acting on foreign orders, while Interior Minister Marwan Charbel has summoned the officer who lured al-Mawlawi to the office for questioning over the manner in which the arrest was made.

Al-Mawlawi's supporters say he was targeted because of his help for Syrian refugees fleeing to Lebanon.

Abdulsalam was extradited by the Iranian authorities to Syria in the past few months, and then he entered Lebanon and was arrested when he was on his way to the Rafik Hariri International Airport.

Investigations revealed that Abdulsalam had continuous contacts with al-Qaida-linked figures in Afghanistan.

SO the fighting in tripoli is over this terrorist network being sprung?

filth in north and south

Ufff guys I am impressed by your insights. M14 was outraged by how this terrorist was approached and arrested. Bass 7ottkoun 3ala msabbet w insults. We cannot expect more from hariri's mwazzafeen :)

hahahaha no worries 3am ba3mil ktir. Advice : watch your language just because when you use your emotions it means you are hurt, for what I say is so true :)

chou ma'hour hahaha :) We support the goverment's actions that we are leading. Before it was not in our hands. It was with hareerz focusing on solidere's spending.
How can someone so rich go bankrupt. Enno he loves girls, alcohol and partying we all know that (you want names?) but to reach a point where he is bankrupt??? Even after taking billings men el khazeene?!!! Akid slash it's above your understanding, you don't seem educated enough. It's fine you will remain mwazzaf... Is he still paying your salary btw?

Something you will never understand slash ;) won't waste time with someone using as a defense 'I am now with your mum' hahaha :)
fi a minimum level I never go below...
I am for fights of ideas I find this challenging and kind of brings things forward but such low insults non merci lol ;) We definitely are different you and me but you are no different from milichyet el m7achicheen :) you proved it sorry! And believe me many of them were with me at school...

well, great achievement now we can get them all out from here.

why arrest the small fish, go for the big whale and arrest Harriri and Siniora, this is the 2nd time they burn Tripoli for their political aims

kes, go back to your cage

soon kersweneh once we get data points. We respect the justice and follow the process. bass ta ykhallouna nechtighil :)

Dawlat libnan al Saghir is a dream but man, is it a good one. Screw the iranian shia gangs in the south and bekaa and the saudi sunni terrorists in the north. Long live mount lebanon, the true lebanon that represents the cedars and the flag. Down with its filthy surroundings.

so what is the difference between this cell and hizbullah? one is helping the Sunnis and the other the Shiites...
i guess hizbullah is a larger network with much larger influence over politics, arms, drugs, money laundering...........
the more power you have, the less chance of being labeled a terrorist group...at least that's the situation in our so called democratic country...

Hizballa is the biggest terrorist org. in the whole world.

Allouchito you are losing credibility. Not one single person even in M14 would call then terrorists... You are crossing the red line but again you are free :)

Slash fesh khel'ak add ma baddak, only then you can make sense. Sebb, allil e7tiram kello hayda doesn't even affect me haha :)
Am having fun and expecting clear facts from you without the frustration part... Just facts bala emotions ;)

Bravo bandoul bhannik! I see consistency in M14 supporters. Calling a third of your population terrorists is a bit mmm absurd? let's burn them and the issue will be closed! chou ra'yak?
Lek not even European countries call them terrorists ma 3ada of course the US&Co, which makes sense :)
Open your eyes ya 3alam!

you re right bandoul even if some deny the truth! what difference is there between salafis and hezb? none!

salafis are financed by saudis and hezb by iran = two extremist religious countries!
the hezbi flag brandishes a kalashnikov and a coran
they both have welfare programs to make people support them by buying them!
it makes them the same except one is sunni the other chia!

aounists for decades called them terrorists, funny now they changed and call them resistance! hahaha!

but hezbis are smarter and insidious: first nasrallah started by forbidding all the chias claiming a pure lebanese chiism to take responsabilities in the party and put them aside just to obey iran. they built up welfare programs like any extremist party does to buy people s confidence. they paid women to wear like ninjas. they built up a secret police just like extremist countries. they make others do the dirty work to keep their name clean. they put aside any other party in the south who were resisting to claim being the sole indispensable party!
they cleverly made up their way to the gvt and indirectly, as usual, are governing evrything..they threaten the country with their arms...
it has lots of similarities with the ascent of hitler by the way....!

and it is not a terrorist party? LOL...

If there is good faith probable cause of this person having commited a crime, regardless of the means by which he was apprehended, I have no problem with his apprehension. Sometimes trickery is called for to get a person who may well have committed a criminal offense.
Have no doubt, I do not think much of this M8 Hezbollah hide bound government of Najib Mikati, but when they get it right, I'll be the first to give them credit for carrying out the duties of their offices.
Bravo

If there is good faith probable cause of this person having commited a crime, regardless of the means by which he was apprehended, I have no problem with his apprehension. Sometimes trickery is called for to get a person who may well have committed a criminal offense.
Have no doubt, I do not think much of this M8 Hezbollah hide bound government of Najib Mikati, but when they get it right, I'll be the first to give them credit for carrying out the duties of their offices.
Bravo

if this guy is an outlaw or a terrorist as they say no pb in his arrest but the big problem which creates tensions and strife in the country is that when the army wants they can find an outlaw but when he belongs to hezb or amal, pffftt they cannot!

the double standards of M8 are the cause of the divide in this country!

Good riddance.But hopefully they will continue working and not only targeting one sect.
Remember the country is full of filthy hizbollah s terrorists.
By the way ,have they managed to catch Samer hanna s killer?