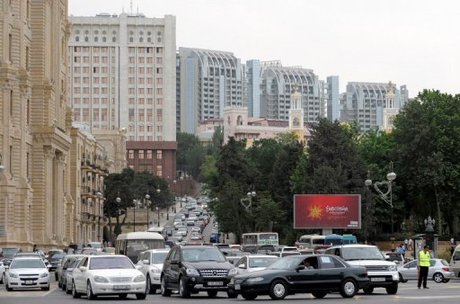 Azerbaijan foiled an attempt to stage "terrorist" attacks while it was hosting the Eurovision Song Contest last week and arrested dozens of suspected plotters, the security ministry said Wednesday.

"The main goal of the group was to stage terrorist acts in Baku during Eurovision," the National Security Ministry said in a statement. "As a result of the measures taken, 40 members of the group were arrested."

The group was planning attacks on the concert hall where Eurovision was held, on Azerbaijani President Ilham Aliyev, police buildings, hotels used by foreigners, mosques and other religious sites in the ex-Soviet state, it said.

The plotters "obtained Eurovision tickets with the aim of (committing) a terrorist act at the Baku Crystal Hall" where the pop competition was held, it said.

They were allegedly planning to hit the oil-rich, mainly Muslim country's strongman leader Aliyev during his visit to Azerbaijan's north-western regions last month.

They also intended to target the luxury Hilton and Marriott hotels in Baku by blowing up cars packed with explosives, according to the statement.

Security services detained the alleged gang during operations in the cities of Baku, Ganja and Sumgayit as well as several other regions of the country, the ministry said without giving dates.

"The National Security Ministry opted not to disseminate information about neutralizing the group during Eurovision in order not to provoke panic among citizens and foreign guests," it said.

Some of the alleged plotters put up armed resistance and two suspects were killed, both of them Azerbaijani citizens, the statement said.

A large amount of firearms and explosives was also allegedly seized when the suspects were detained.

The plot was said to have been hatched during a meeting between three of the suspects and what the statement described as "Dagestani emirs" across the border in the neighboring Russian republic of Dagestan in February 2011.

"The goal was to create an atmosphere of anarchy, to spread panic among citizens," the ministry said.

After the attacks, the group was planning to hide in the forests of Dagestan and wait for more armed militants to join them, it said.

Eurovision, watched by more than 100 million people worldwide, was the biggest cultural event staged in Azerbaijan since independence from the Soviet Union in 1991.

The authorities spent hundreds of millions of dollars building the Crystal Hall venue and beautifying the capital ahead of the competition in an attempt to win acclaim for the Caspian Sea state previously known mainly as an energy exporter on Europe's eastern fringe.

The contest's grand final on Saturday was won by Swedish singer Loreen.

The Azerbaijani security services have thwarted a series of alleged attack plots in recent months, accusing some of the suspects of having links with neighbor Iran.