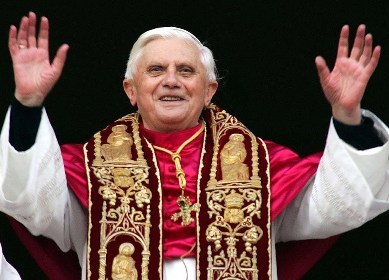 The crisis in Syria and its impact on Lebanon have put in doubt Pope Benedict XVI's planned visit to Lebanon in September, reports said Wednesday.

The trip scheduled for September 14 to 16 remains confirmed on the program published regularly on the pope's planned visits.

However, it "could be canceled at the last minute" due to the unrest in Syria, according to unnamed sources quoted by I.MEDIA, the agency specializing on Vatican news.

The Vatican's "reticence at giving precise outlines on the voyage is telling of a desire to move slowly in a regional situation that is becoming more explosive daily," according to the website Vatican Insider.

It said that the secretariat has been analyzing the development of the Syrian crisis closely, pointing in particular to claims that the conflict is being "fuelled by weapons and armed jihadists from overseas, including Lebanon."

There are fears at the Vatican that the conflict could spill in to northern Lebanon.

Alberto Gasbarri, who is in charge of the logistics of pontiff travels, will head to Beirut by the end of June to plan the visit.

Prime Minister Najib Miqati invited the pontiff to visit in November last year during a visit to the Vatican.

The trip will mark the second to the region for Benedict, who visited Jordan, Israel and the Palestinian Territories in 2009.

During the trip, he is expected to hand over an apostolic exhortation to bishops from throughout the Middle East, the Vatican said.

is the pope interested in the security of bilad el arz or his co-religious partners in the region???if he is anxious about his tribe in the middle east let him visit PALESTINE OR DEAL WITH THE WAHHABIES AND FARSIS
THE SALVATION OF LEBANON IS IN A CIVIC STATE LIKE ITALY OR FRANCE OR GERMANY...PLSE UR EMINENCE HAVE MERCY.

I think Lebanese look forward to Welcoming the Pope to our diverse and experienced country. No doubt Lebanese see themselves as the initiators of Christianity.

Also, his steps on Lebanese soil assures Lebanon also a sovereign state. A country deemed on security its interests, identity and freedom.

If the pope does not come to Lebanon, even if there is a war, then im turning orthodox or something! Jesus would have come so who is the pope not too? Don't play games now, you are not better then God, so do Gods work as he did and you better go to Lebanon rain hail or shine!

Karim, if the Pope wanted to drink a glass of wine, the Hezb will blow up the place. So down with wahabis,Hezb, and religious zealots of all creeds. I remember Rafic HAriri in one interview saying "A moderate Christian is closer to me than a fanatic Muslim" . Long live democracy and the progressive Lebanon we knew back in the good old days.

Who cares, man wearing a hat pretending to be god's sole power on earth, and now he is scared like a chicken to come with his so called blessings.

Stay home, pope, with your gold and diamonds. Just pray the problems away, that has worked very well in the past lol.

Ma ahdamon houle el couple .Karim el Ghabi ou FT sermeye.
But at least KArim el ghabi did not accuse the pope of being Wahhabi.
Hey FT sermeye any comments about Syrian army planting mines on the lebanese side?you did not add any comments cunty .

What is this Nazi coming here for, as Sayyed Hassan taught us this is Muslim land the Christians came as invaders. He can only come here if he promises to take the invaders back with him.