26 Dead as Thousands Rally in Syria on 'Friday of Readiness' 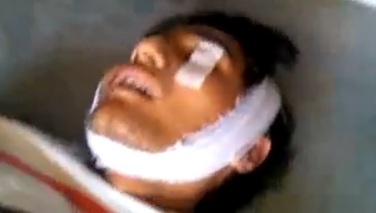 At least 26 people were killed in violence on Friday as thousands protested against the regime across Syria, activists and a monitoring group said.

Activists uploaded videos of protests outside mosques or street marches on what they named a "Friday of Readiness."

For its part, the Syrian Observatory for Human Rights said eight people were killed in Busra al-Sham in the southern province of Daraa in an explosion outside a mosque, while another blast was reported in al-Midan area of Damascus, without reports of casualties.

Regime forces also tried to reassert control over the central city of Homs and the town of Andan in Aleppo province, clashing with rebels and leaving two people dead in shelling, the Observatory said

The Britain-based group had reported at least another 84 people killed in clashes and bombings nationwide on Thursday.

French Foreign Minister Laurent Fabius said major powers could hold a conference at the end of the month in Geneva on the crisis which erupted in mid-March 2011 and has since cost more than 14,400 lives, according to the Observatory.

"There is a possibility of holding a conference in Geneva on June 30," Fabius told France Inter radio.

Fabius also said that talks were under way with Russia on Syria's future if President Bashar Assad was ousted.

But Russian Foreign Minister Sergei Lavrov swiftly denied such talks had taken place with France or the United States, which have both been pushing for Assad to step down.

"There were no such discussions and there could not have been such discussions. This completely contradicts our position," Lavrov told reporters. "We are not involved in regime change."

Russia, along with China, has vetoed two Security Council resolutions against Assad and has vowed to oppose any military intervention.

Also on Thursday, 14 people were also wounded in suicide vehicle bombing near an important Shiite Muslim shrine in the capital, the state news agency SANA said.

Syrian authorities said they had uncovered an al-Qaida plot to bomb Damascus mosques around the main weekly prayers.

A suspect detained on Thursday confessed that he had been planning a suicide bombing during Friday prayers at Al-Rifai Mosque in the heart of the capital, SANA reported.

The suspect told interrogators that the group's members "have prepared young men... to carry out suicide bombings in several areas in Damascus during prayers on Friday, June 15," SANA said.

In a fresh report of bloodshed, the Syrian Observatory said nine bodies, some of them mutilated, had been found.

"The bodies of nine people were found in Hamouria in Damascus province, some with their throats slit," the watchdog's head Rami Abdel Rahman told Agence France Presse. "It is unclear who carried out the attack."

In Istanbul, Syrian opposition leaders were meeting on Friday in a bid to settle their differences and forge a united front to confront the escalating conflict in their homeland.

"We will work towards a unified vision," Burhan Ghalioun, the former head of the main opposition group, the Syrian National Council, told Agence France Presse shortly before the two-day gathering kicked off.

The New York-based group said it had interviewed 10 former detainees, including two women, who described being sexually abused or witnessing such abuse in detention.