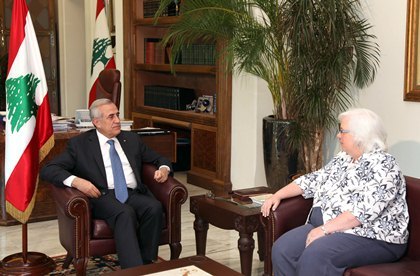 U.S. Ambassador to Lebanon Maura Connelly praised on Wednesday the resumption of the national dialogue between Lebanese foes under the sponsorship of President Michel Suleiman.

According to a statement issued by the U.S. embassy, Connelly met with Suleiman at the Baabda Palace and lauded his efforts in re-launching the all-party talks “to strengthen the national unity and stability in Lebanon.”

She renewed her country’s commitment to a stable, sovereign and independent Lebanon.

The statement pointed out that the two also discussed the political and security situation in Lebanon and the region.

Lebanese political leaders held on Monday the second round of the national dialogue and agreed to disarm the Palestinian groups outside the refugee camps and to set the basics of the national defense strategy during the third round on July 24.