Paoli on Bastille Day: Lebanon’s Democracy a Model to be Followed in Region 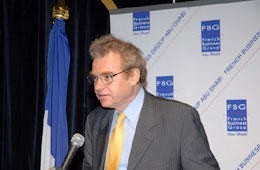 French Ambassador to Lebanon Patrice Paoli hailed on Saturday the Lebanese democracy and coexistence, which became a model in the region.

“Lebanon’s democracy, freedom and coexistence among its citizens became a model in the region, in addition to the stability it witnessed during the recent months,” Paoli said in a ceremony held in Kasr al-Sanawbar on the occasion of French Bastille Day.

He urged officials to meet the hopes of the Lebanese people.

On the upcoming 2013 parliamentary elections, the ambassador said that it should address the challenges facing the country.

Paoli stressed that French President Francois Hollande is keen to reinforce the bilateral ties with Lebanon.

He pointed out that his country will offer Lebanon help in different sectors including the civil defense, the airport security and judges training program and many other projects.

President Michel Suleiman arrived in Paris on Wednesday on a two-day official visit where he held talks with his French counterpart and other senior officials.

Concerning the turmoil in the neighboring country Syria, Paoli said that the Syrian regime has failed to carry out its people’s demands to obtain freedom, democracy and justice.

“It only used the most heinous forms of violence that can’t be described,” the ambassador said.

Incidents along the Lebanese-Syrian border intensified during the past few weeks with several officials voicing their fear that the revolt in Syria which kicked off in mid-March 2011 might spill into the country.