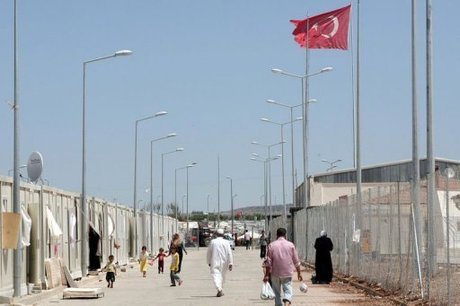 Turkish police fired tear gas on stone-throwing Syrian refugees who were protesting Sunday at the lack of food and water at camps on the border with their conflict-ravaged homeland.

A Turkish official said demonstrations erupted at two of the 10 camps set up along the border which are sheltering about 40,000 Syrians who have fled the escalating violence at home.

"The clashes were some of the most violent of recent months," the official told Agence France Presse.

The unrest flared after Syrian rebel fighters seized a nearby border post after hours of fighting during the night, the third now held by the anti-regime militants.

"We have had no food for three days," said a young Syrian boy standing outside the container city of Kilis, which is home to some 15,000 people who have taken refuge from President Bashar Assad's bloody crackdown.

"We have no water. They give us cards for shopping but we need money, we need weapons to take to our fellow fighters," said Ahmet Abbas.

The Kilis camp lies nearby the Oncupinar border crossing which faces the Al-Salama outpost on the Syrian side, the latest to be seized by the rebels.

"Kill us!" cried a Syrian woman carrying a baby in her lap, as dozens of gendarmerie forces and police were passing by. "Get rid of us," she shouted.

Refugees at the Kilis camp said two demonstrators has been killed but the Turkish official said there was no confirmation of any deaths, although one Turkish policeman was injured.

After the clashes, many refugees gathered outside the camp, and some were leaving Turkey in their cars, heading back to the Syrian side of the border.

Similar protests erupted at the Islahiye camp about 90 kilometers (55 miles) away, the official said.

Earlier this month, a fire in refugee camps in southern Turkey's Hatay province killed two people, which officials said due to an electrical short-circuit.

"Police, soldiers are Alawites. Therefore, they don't like us here," said another refugee Sabri Hallac. "We escaped from Assad but here we are treated the same."

Assad is from Syria's minority Alawite sect, an offshoot of Shiite Islam. The protesters are Sunni Muslims.

"We don't have money to sustain our life here. They are selling one loaf of bread for one Turkish lira (55 cents)," said Hallac. "Everybody here will starve to death."