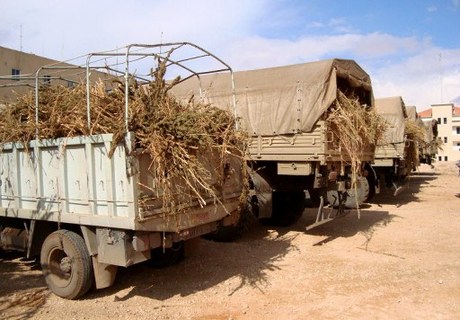 One person was injured on Saturday when cannabis farmers opened fire on a van transporting workers to help the Internal Security Forces destroy cannabis fields in the eastern Bekaa valley, the National News Agency reported.

NNA said Hussein Nayef Salim, 57, was wounded in the waist after around 15 bullets hit the van in the town of Hawsh Barada in Baalbek.

In a related development, residents of al-Yammouneh burned tires at the town’s entrances to protest the ISF operation to destroy cannabis crops.

But the Lebanese armed forces reopened the roads after firing in the air to disperse the protesters.

The incidents came a day after the Lebanese army command said two soldiers were injured after gunmen opened fire on the troops and ISF personnel in al-Yammouneh.

The soldiers fired back at the source of the shooting and the army carried out raids to arrest the suspects, while the process of eradicating the crops continued in accordance with the scheduled program, the army said.

The ISF’s general command said that around 200 dunums of cannabis fields were destroyed on Friday, upping the total areas of eradication in the Bekaa to 6,615 dunums.

hizbushaitan/amal are against the state as shown constantly through their actions and they want dialogue! for what?
the above example as well as what happened in dekwaneh/jdeideh (aggressing municipality police) and so many other incidents depict a trend to undermine the state on each occasion.
iranins should be deported to iran together with all their followers including fpm.

I am so sorry to say this but our beloved Lebanon is well and truly over, too many scumbags and shi tik tik shi ti3a,Only God and Jesus can save us now.

One more point where the gouvernment is yielding to US pressure. I hope the government is getting enough from the US in exchange from stopping this important source of money for villages.

people should think before they act.. we're living in the 2012 for god sake.. .. governments are making fortunes from cannabis and we in this country are destroying those fields.. why? what's the reason? does anyone read the statistics that were made about cannabis? is nuclear weapons and killing others better? or we only have to obey the American law and help them destroying our country?