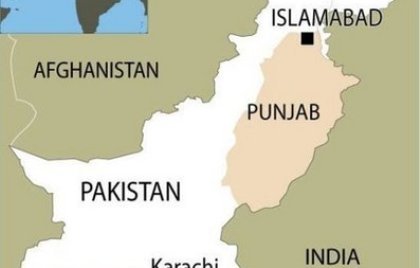 A double suicide bomb attack outside a shrine in the central Pakistani province of Punjab on Sunday killed 41 people, a police officer told Agence France Presse from the scene of the blasts.

Hundreds of worshippers had gathered at the shrine for a religious ceremony when the attacks took place.

"We have recovered 41 bodies so far," said the officer, Zahid Hussain Shah, adding that more than 70 were wounded.

"Both were suicide attackers, they came on foot and blew themselves up when police on duty stopped them."

Many of those wounded in the attacks were in a serious condition, he said, and the injured have been taken to the Dera Ghazi Khan hospital for treatment.

Regional police chief Ahmed Mubarak confirmed two suicide bombers tried to enter the shrine but failed and blew themselves up.

The detainees included a suspected suicide bomber identified as Fida Hussain, a 15- to 16-year-old Afghan refugee from Pakistan's tribal area, he said.

Prime Minister Yousuf Raza Gilani condemned the blasts, saying that "such cowardly acts of terror clearly demonstrate that the culprits involved neither have any faith nor any belief in human values".

"Such violent acts only seem to be conspiracy to divide the society and create fear," a statement from Gilani's office said.

Sufi worshippers, who follow a mystical strain of Islam, have increasingly been the target of bloody attacks by Islamist militants in Pakistan.

No group has immediately claimed responsibility for the attacks, but Sunni extremists, including the Taliban, are vehemently opposed to the Sufi strand of Islam and consider their shrines to be idolatrous.

Two suicide bombers blew themselves up among crowds of worshippers at Pakistan's most popular Sufi site, the Data Darbar shrine in the eastern city of Lahore, in July last year, killing 42 people.

On October 7, two suicide bombers blew themselves up at a Sufi shrine of Abdullah Shah Ghazi in Karachi, killing nine worshippers, including two children.

Also in October, a bomb blast outside the country's second most popular Sufi shrine, dedicated to the 12th century saint Baba Farid, also known as Ganjshakar, in the Punjab town of Pakpattan killed four people.

Nearly 4,200 people have been killed in suicide attacks and bomb explosions, blamed on homegrown Taliban and other Islamist extremist networks, since government troops stormed a radical mosque in Islamabad in July 2007.

Dera Ghazi Khan, 480 kilometers southwest of Islamabad, sits close to the tribal area which is known as a hub of Taliban and al-Qaida-linked militants. The rugged tribal region is described by Washington as the most dangerous place on Earth.

Sunday's attack is the fifth in as many days.

Six people including a Baluch tribal elder were killed by a remote-controlled bomb in a southwestern Pakistani province of Baluchistan on Thursday.

Also Thursday, a suicide bomb blast targeting an Islamic party chief killed at least 13 people in the northwestern town of Charsadda, the second attack aimed at the politician and his supporters in two days.