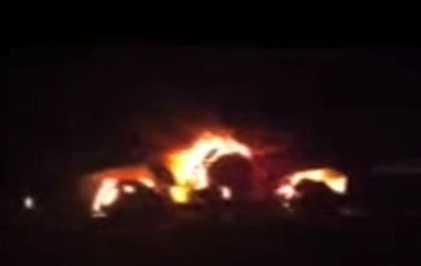 Egypt's army vowed Monday to "avenge" the killing of 16 troops by gunmen near the Israeli border, as President Mohammed Morsi ordered security forces to take full control of the Sinai Peninsula.

In Sunday's attack, 35 gunmen in Bedouin clothing opened fire on the troops before crossing into the Jewish state in an armored vehicle, Egyptian officials said. Israel said five gunmen were killed on its side.

The 1979 peace treaty between Egypt and Israel, under which Israel withdrew from the Sinai which it had occupied in the 1967 Middle East war, set strict limits on Egyptian troop numbers in the peninsula.

But Israel has complained of growing lawlessness on its southern border since the overthrow of veteran president Hosni Mubarak last year and called for action by Cairo.

"We swear in the name of God to avenge them," the Egyptian army said. "Egyptians will not have to wait long before they see a reaction to this attack by terrorists."

"Anyone liaising with these groups that have attacked our troops in the Sinai in recent months will pay dearly, be it inside Egypt or abroad," it added.

Israel said two armored vehicles were seized, one of which exploded by itself and the other destroyed by a helicopter. The Israeli army said it found the bodies of five gunmen.

"We were ready because we had previous information from Shin Bet (security service) and from military intelligence services, which allowed us to thwart a bloody attack," military spokesman Yoav Mordechai told Israeli army radio.

Gunmen aboard the armored vehicle "fired in every direction after entering Israeli territory before being attacked by tanks and from the air," said Mordechai.

They were "members of the global jihad based in Sinai, which has become a hothouse for world terrorism because of the weak control exercised" by Egypt, he added.

President Morsi said he had given "clear instructions" that Egypt must take "full control of the Sinai."

Morsi, who only took the oath of office on June 30 to become Egypt's first freely elected leader, said those who committed the "cowardly" attack and those who worked with them would pay dearly.

Israeli Prime Minister Benjamin Netanyahu expressed "regret" over the deaths of the Egyptian guards during a visit to the site with Defense Minister Ehud Barak.

"I think it is clear that Israel and Egypt have a common interest in keeping the border between us peaceful," Netanyahu said, adding the attack showed Israel could only rely on itself for its security.

"Nobody can fulfill this role other than the IDF (Israel Defense Forces) and the security services of the State of Israel and this is how we will continue to act."

Barak said the attempt was unlikely to be the last.

"I hope that this will be a wake-up call to the Egyptians regarding the need to be alert and effective on their side," his office quoted him as saying.

Egypt said 16 soldiers and border guards were killed, while another seven were wounded. Israel said nobody from the Jewish state was hurt.

Egypt's MENA news agency said the gunmen were "jihadists" who "infiltrated from Gaza through tunnels in collaboration with jihadist elements in the al-Mahdiya and Gabal Halal areas" inside Egypt.

The Egyptian army said there were 35 gunmen, and that they were backed by mortar fire from the Gaza Strip.

"Elements in the Gaza Strip helped by firing mortars" during the "terrorist act" which was launched during "the iftar and the call to prayer" signaling the end of the daytime Muslim fast during Ramadan, it said.

State media said Egypt was closing "until further notice" its Rafah border post with Gaza, the Palestinian territory's only crossing outside Israeli control.

Hamas dismissed the idea that militants from inside Gaza may have been involved, and put its security forces on full alert.

"The national security services are on a 100-percent state of alert to maintain common security between the Gaza Strip and Egypt," said Hamas security chief Jamal al-Jarrah, accusing Israel of encouraging speculation that Gazans were involved.

Israel accused Sinai-based Islamists of having carried out a cross-border ambush last August that killed eight Israelis, and they have also been blamed for repeated bombings of a gas pipeline to Israel and Jordan.

The Sinai is home to Egypt's Red Sea resorts, a source of lucrative tourist income, and is also where Bedouin, long marginalized under the Mubarak regime, are based.

To stop any attacks and illegal cross-border activities, Israel has speeded up construction of a wall fitted with an electronic alert system along its 240-kilometer (150-mile) border with Egypt.

For us old timers it seems like yesterday when Palestinians attacked lebanese soldiers and tried to infiltrate the Israeli border.
Then, those in the government and outside who opposed these actions were branded isolasionists and Zionist agents! the results were tragic and lebanon has never recovered since.
Today the Egyptians are facing the same extremism with a salafist flavor and I do not believe that they will allow what happened to lebanon to happen to their country.

This has got to be the work of The Iranian and the Syrian regimes who desperately need a diversion from Assad's demise.