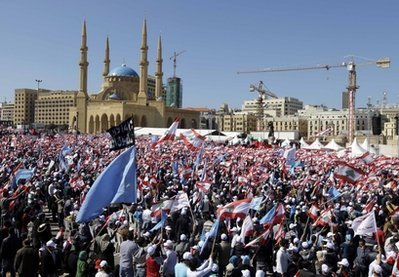 Several March 14 camp officials lauded the discovery of a Syrian plot to create strife in Lebanon, as revealed by former minister and MP Michel Samaha’s arrest, saying the country should cut ties with Syria, reported the daily An Nahar on Sunday.

MP Marwan Hamadeh hoped that Foreign Minister Adnan Mansour “would highlight the development to his Arab counterparts at the Jeddah conference.”

“Syria would have destroyed civil peace in Lebanon had its plan been successful,” he remarked.

“It is time to summon the Syrian ambassador in Lebanon and return him and the explosives to Syria,” he noted.

“Our ambassador in Damascus should return until a new democratic regime that is peaceful towards Lebanon is formed,” said Hamadeh.

Arab foreign ministers were set to hold a meeting on Syria in Saudi Arabia on Sunday.

Phalange Party MP Sami Gemayel meanwhile hoped to An Nahar that all sides would await the results of the legal proceedings before jumping to conclusions in Samaha’s case.

“Every person is innocent until proven guilty,” he remarked.

“It would be the first time in 30 years that the Syrian regime would be caught in the act” of violating Lebanon should the charges against him be proven, noted the MP.

“Only then should anyone issuing statements in support to Samaha be punished,” added Gemayel.

These measures should be followed with canceling the treaty of friendship and cooperation between Lebanon and Syria, halting security coordination between the two countries, expelling the Syrian ambassador to Lebanon, and trying Samaha for grand treason, he stressed.

March 14 General Secretariat coordinator Fares Soaid revealed to An Nahar that the March 14 forces have held consultation over the past 48 hours, in light of Samaha’s arrest.

MP Fouad Saniora will inform President Michel Suleiman of the conclusions of the talks during his meeting with him on Monday, he added.

“This issue has become a national cause that transcends the case of the telecom data and Hizbullah’s position on the national defense strategy,” he noted.

In addition, Soaid suggested that the president and entire government must take the decision to “sever ties with the Syrian regime and refuse to sit at the same table with its members.”

They must also submit a request to the United Nations, in accordance to Security Council resolution 1701, to control the border with Syria in support of the Lebanese army, he continued.

This must also be accompanied with a complaint against the Syrian regime “that has demonstrated that it wants to create strife in Lebanon,” he stated.

Some reports said that they were planning on carrying out attacks against various political and religious figures.

I say we ship the explosives to Michael Aoun house. There is only one fate that awaits that Syrian loving lebanese soldier killing cowardly failed general, explosive ending.

m8 are toast, and I dare any of them to talk about the threat of salafis again, as they will confirm once more they are syrian agents.
m8 lost all their edge for good, and that within a few days since the syrian regime plot was uncovered.
let us if they have any intelligence left and await their new comments.
fpm already proved to be the most stupid of all with their comments.

if he was indeed planning those crimes, then its wonderful and a great relief that he was arrested. However, there is no verdict yet. Even some M14 figures (christians) are asking for precaution in the matter.

looking at it in a strategic way though, it looks suspicious.
knowing that its been a while now that Siniora & acolytes (US, SA, etc) are trying to bring down the gvt, evoking: clashes in the north (which dont date back to May 2012 if i recall), army checkpoint mishaps, telecom data issue related to attempted murder, (electricity issue), (strikes and road blocks and burning tires), etc. but nothing changes, gvt stays in place( maybe because Miqati is outsmarting them).
Now this.

sorry i was brought up and lived my entire life in Europe... my observation skills are not tainted by what happens in this little piece of land, rather i was taught to look at the bigger picture.
"Dumb" is not a common adjective used when referring to my person by people of high intellectual standards, quite the contrary.

A lot has to be blamed on "America". Especially the 15 years of total syrian occupation and domination... But America isn't democrats or republicans, W Bush or Kissinger... America is Ernest Hemingway and Tom Waits, The Doors and Jack Kerouack.. America is great free poets... And this America I will love till my last breath...

Siniora, acolytes & the future (movement that is stuck in the past) is saying: now show us that you are patriots (how quickly the focal point has shifted from Samaha, the scapegoat, to the real deal: Assad) and severe ties with Syria. Aha, if you dont do it, then you are not real, true Lebanese, you are not patriots, you dont deserve to be in power so resign.

It all looks too suspicious to me as yet.

i didnt recycle the post dear; it is merely the continuation of the previous one as there is a character limit to comments on this website.
Before accusing, try to inquire about the facts first. You shall free yourself from a lot of unnecessary trouble bound to your close mindedness and accusation endeavors.

Don't mean to rain on anyones parade, but a question asks it self now very simple but strange. HA has been the hand of the syrian regime in Lebanon for over a decade, they are the experts in espionage and this kind of missions. You also have Amal and their absolute willing to do whatever is requested from their warlord in Syria. Why Nahhas? clearly based on his actions detailed in the interrogation so far his work was extremely sloppy, amaturish, and lacked resources. Why was Assad using him instead of the well experienced resourced Amal and HA?

If I didn't know any better I'd think HA and Amal are distancing them selves from the Assad mafia...

Lebanon needs to refer this international terror plot to the UN and start a trial immediately on ASSad and his killer generals. Nothing less will be accepted.

I wish those "opposition officials" were that courageous during the 90s.... Having said that, we should file a complaint against the syrian regime and cut ties whenever all of this is confirmed in the court of law... Plus I don't think this means there is no salafi danger up north... Many evils our fighting within our land...

If this turns out to be true and proven, Michel Samaha should hang, the Syrian "Ambassador" should be expelled, and ties to "brotherly/sisterly" Syria should be terminated, until Bashar Assad hangs from that lightpole in Old Damascus.

Hang Ali Mamluk and the Brigadier General right next to Bashar, as well.