Rebel Colonel Says Most of Syria Outside Regime Control 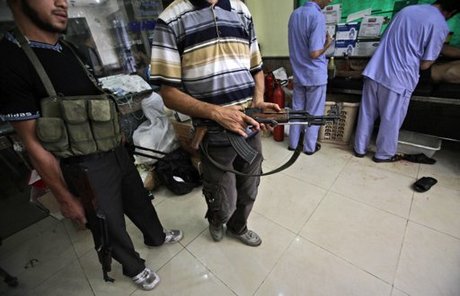 Syria's vast territory is increasingly outside the control of the regular military, whose aerial superiority is the last strength keeping the Damascus regime afloat, a rebel chief told Agence France Presse.

"With or without outside help, the fall of the regime is a question of months, not years," said Colonel Ahmed Abdel Wahab, who claims that he commands a brigade of 850 men in the Free Syrian Army (FSA).

"If we had anti-aircraft and anti-tank missiles, we could quickly gain the advantage," he said, speaking in the village of Atma near the Syrian border with Turkey.

"But if foreign countries don't give us these, we will still win. It will take longer, that's all.

"We control most of the country. In most regions, the soldiers are prisoners of their barracks. They go out very little and we can move freely everywhere, except Damascus."

"As long as we avoid the main roads, we can move freely," he added.

Wahab, a colonel in the regular army only nine months ago, said his defection was driven by "the magnitude of the crimes of the regime, which is killing its own people."

He said he commands four katibas (battalions) which make up the "Nasser Salaheddine" brigade in Syria's second city of Aleppo and the region.

Wahab said he attends daily meetings with FSA leaders in the northern metropolis, where orders are given to him and other battalion commanders.

But he added that he has remained in contact with officers who are still in the regular army.

"Their morale is very bad," he said.

"If the Sunni soldiers don't desert, it's only because they fear for their families, who are being held hostage. I was able to find a safe place for mine before leaving the army."

Nearly 80 percent of towns and villages along the Turkish border are outside the control of Damascus, according to the Syrian Observatory for Human Rights.

The AFP has observed that in many of these areas, residents are managing their own affairs.