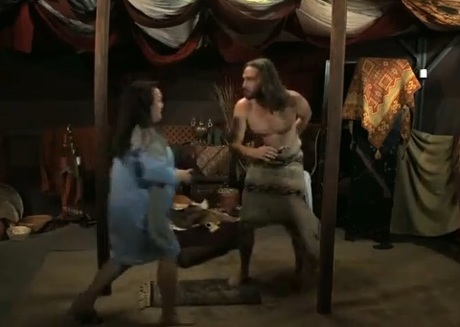 Judge Nadim Zwein prohibited on Monday the airing of the anti-Islam film, Innocence of Muslims, in Lebanon due to its “great offense” to Islam.

The decision was made after it was found that the movie contained several scenes that are considered to be offensive.

A request has been made to YouTube, Liveleak, and the Hollywood Reporter websites to ban the airing of the film in Lebanon.

The judge also ordered the Information Ministry and all internet service providers to take the necessary measures to stop its broadcast in Lebanon.

A fine of $1million will be laid down against any side that violates the judge's order.

The anti-Islam film sparked outrage and violent protests against the United States throughout the Muslim world over the past two weeks.

The violence culminated in an attack against the U.S. consulate in Benghazi in Libya that resulted in the death of U.S. Ambassador Chris Stevens and three staff members.

In Lebanon, the outrage against the film translated into attacks against the KFC fast food restaurant in the northern city of Tripoli and its Nabatiyeh branch in the South.

One person was also killed in the Tripoli unrest.

I understand that:
Tripoli's thugs were manipulated by some malevolent party into creating chaos.- Their move was disgusting.
Nasrallah used the film to to position and market himself as a reasonable, christian-respecting, restrained political chief, think elections 2013... His move while not disgusting, was self serving and manipulative.
so yes if you are only comparing, you are right.
However, I would like to see 100,000 chiite manifest for LEBANON for once. Not for Islam. Not against some stupid movie. Not for Assad. But for LEBANON. And we have enough causes to manifest for in our country. What about a manifestation to start drilling for oil? Or a manifestation to remove all palestinian and other illegal weapons? If they have all this energy to manifest, why not use it for something constructive?

FT hizb was not protesting the film ,but promoting themselves ..there is a difference

Schizo as always BSThrower voting yourself UP and others down for your usual self-stimulating thrill. Moron Farsi. What do you know about freedom of speech. To you and other stone-aged conditioned sheep freedom means what your supreme leaders allow you to mutter out during all these protests/gatherings. Pathetic and regressed to say the least!

how about unbanning Levi jeans instead of having to deal with Elvi's being sold in their place while you're at it?

Freedom of speech. Why are we Arabs so backwards and uncivilized that we cannot understand something as simple as freedom of speech? You don't have to like what a person says, you just have to respect their right to say it!

Are you serious? The US and Canada banned the al-manar and other lebanese TV from showing in this part of the world on cable and/or satellite. How backward are they? Where is your freedom of speech?

Your comment was dismissed by most of the commentators here. They were distracted by their own opinions about free speech. Instead of giving you a valid answer, which there is none.

Don't be fooled by Freedom of Speech in America (which is what I'm assuming you are comparing to). Freedom of speech ends up being our most contested right. Any hate Speech is protected, unless it involves speech beyond the First Amendment's protection like incitement to violence (There is a a large list of restrictions of speech not protrected by the First Amendment). I feel this Movie was made for the incitement of violence to occur, not in the U.S., but in the middle east. Sad to say it will be protected in the U.S., because there will be no violence or protests because of this movie.

Have you seen " Adult swim" in the US, they make fun if Jesus wrestling with the devil. Muslim clerics on the other hand, will kill if someone plays a role of Mohammad in a movie.

Wow Farsi BSThrower....nice of you to share with us a personal phase of your life here. Sorry this explains it all why you such a demented schizo!

Their is no such thing as half pregnant. Free speech is free speech. As soon as we start making qualitative and subjective arguments like you presented in your comment we start on a slippery slope that invites a large breach in free speech whereby anyone can claim that some speech must not be allowed because it infringes on their dignity etc. according to their interpretation.
One can feel indignant, angry or a primal urge to kill etc., one is entitled to their feelings and no one can judge based on intent and feeling. However, one cannot and must not act on those destructive feelings. If they do, they are infringing on someone else's freedom which cannot be allowed in a democracy.
In short, if one believes in free speech then one must suck it up.

If someone made a movie like that, I'd just ignore it. I'm a civilised mature grown up, unlike you and 90% of the arabs.

Your comments are a reflection on you. When it is obvious your logic holds no water you resort to insults. Typical Aouni, HA followers' attitude. How shameful.

Instead of prohibiting a stupid movie, they should prohibit dangerous rockets and other LMG that can are are being used against innocent civilians.

This movie is the most stupid film I ever seen. It´s not even a movie. It can never offense any religion due to it´s bad quality. No one should be offended by this non-film. No one would even notice it if they let it go without mention it. G-d have mercy and put some brain in peoples head so we can make good deeds and respect one another. Men habbe saret abbe.

Can someone explain the benefits of Zawaj el Mot3a?

it's a legal business transaction (with some rules) for pleasure so it's all good ;)

Ask the prophet who married at least 5, the youngest was 9, for a holy cause...

I have not heard anyone say that any of the facts of the movie were incorrect. The 9 year old girl, the heavy taxation of non-believers, the Christian priest who was kicked out wrote a twisted version of the Bible, the killing and killing glorified in the koran,.....etc. I think the problem is that the truth hurts.

Practically useless, since the movie is disseminated on the Internet.

prohibit and ban mr nasrallah who cries out with his multitudes "death to america" ... he represents his sect of over 1 million people in lebanon. this film produced in usa represent no sect but one individual of 300 million americans. such hypocrisy and evil deception here!

Absolute freedom of speach is necessary and should be preserved at all costs, even at the cost of offending people or whatever their opinion is (yes, religion is only an opinion!)

Do you guys realize that someone logged in 8 times to vote up or down each comments? wow, how bored can one be? Hello, go play World of Warcraft...? (:

Naharnet, can you please remove that photo. It is utter blasphemy. Sheikh Assir will see to it that you are brought to justice should you decide NOT to remove it! Long live freedom of speech.

Freedom of opinion is sacred !! no banning is allowed !!! whatsoever!!! the movie it is they point of view of the maker alone...no need for this vast chaos n reactions...

This reaction and other acts aimed to defend God, is belittling God. It's like saying Allah Asghar, not Allah Akbar.

ignorant fools , the movie was only made to kill the embassador in benghazi for some reason , believe it or not thats how smart and inteligent CIA are .

you're an idiot still living in the 20th century... its an amateur video. the internet is owned by us. we do what we want, the government can't orchestrate something like this.