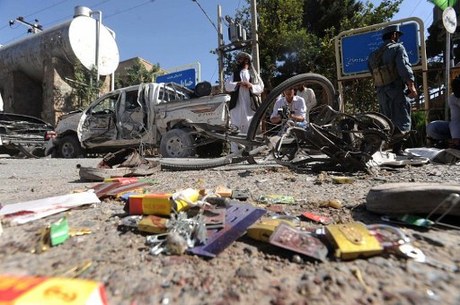 A suicide car bomber targeting an Afghan police station in the southern city of Lashkar Gah killed at least two intelligence agents and wounded 15 other people on Monday, police said.

One intelligence agent and a policeman were among those injured in the blast in the capital of Helmand province, but most were civilians, the provincial governor's spokesman, Ahmad Zirak, told AFP.

"It was a suicide bombing. It was a car bombing. It detonated at the gate of the district seven police station," said police spokesman Farid Ahmad Farhang.

Suicide attacks are a trademark of hardline Taliban Islamists who have waged an 11-year insurgency aimed at toppling the Western-backed government of President Hamid Karzai.

Afghan police are increasingly targets of such assaults as they take a bigger role in the fight against the insurgents ahead of a withdrawal of US-led NATO troops in 2014.

The latest attack came a week after a suicide bomber tore through an Afghan-NATO foot patrol in the eastern city of Khost, killing at least 20 people, including six police and three foreign troops.

And it came on the day that a report by the Brussels-based International Crisis Group issued a new report warning that the Afghan government could collapse after NATO troops pull out.

"The Afghan army and police are overwhelmed and under-prepared for the transition," said Candace Rondeaux, the ICG's senior Afghanistan analyst.