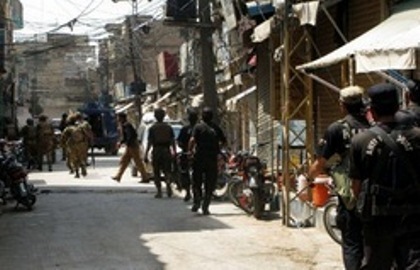 It was the second U.S. missile strike reported in as many days in the northwest, considered a stronghold of the Taliban and al-Qaida.

The attack was the deadliest since similar strike in August last year killed 21 Taliban fighters in the restive tribal region.

The attack comes as Pakistan is in shock over the Taliban's attempted assassination of a 14-year-old child rights activist.

His deputy Rafiq Mohmand later put the toll at 18 dead.

"Several militants were wounded who died later and the new death toll is 18," Mohmand told AFP.

A security official confirmed the attack and the death toll.

The compound was located in the Baland Khel area on the border between Orakzai and North Waziristan, a Pakistani intelligence official told AFP on condition of anonymity.

Militants had sealed off the flattened building and were recovering bodies, he said.

The building belonged to Maulvi Shakirullah, a commander in the forces of Pakistani warlord Hafiz Gul Bahadur.

Bahadur is an ally of the al-Qaida-linked Haqqani network blamed by the Americans for a string of high-profile attacks in Afghanistan.

On Wednesday a U.S. drone strike targeting another compound in North Waziristan killed five fighters, according to Pakistani officials.

The covert U.S. attacks are unpopular in Pakistan, where the government calls them a violation of sovereignty, but American officials believe they are a vital weapon against Islamist militants.

Last week, cricket legend turned politician Imran Khan led thousands of supporters in a motorcade from the capital Islamabad to the edge of the tribal belt to protest against the U.S. strikes.

Human rights activists have said Tuesday's shooting of 14-year-old Malala Yousafzai in the former Taliban stronghold of the Swat valley should be a wake-up call to those who advocate appeasement or peace with the Taliban.

In another incident masked gunmen killed three people including a pro-government tribal elder in an attack on his car on the outskirts of Miranshah, officials said.

"Malik Mashar Khan was returning to his home when unknown gunmen ambushed his vehicle, killing him, his driver and a guard on the spot" before fleeing in a car, a security official said.