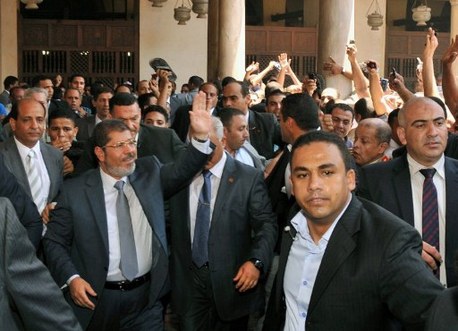 Egypt's President Mohammed Morsi pledged on Friday to bring to justice Mubarak-era officials, a day after his bid to sack the top prosecutor infuriated a judiciary wary of its new Islamist leader.

Morsi reopened a rift with the judges on Thursday after trying to remove the state prosecutor following acquittals of ex-regime men accused of organizing an attack on protesters during last year's uprising against Hosni Mubarak.

"We will never ignore those who committed crimes against the nation and corrupted it," he said in a speech at a mosque in the coastal city of Alexandria.

"They will be dealt with by the judiciary and legal system," he said in the speech reported by the official news agency MENA.

Morsi's bid to remove Mahmoud by appointing him as ambassador to the Vatican tried to bypass checks on presidential control of the prosecutor, further enraging judges after Morsi had unsuccessfully tried to reverse a court order disbanding the Islamist-dominated parliament.

Ahmed al-Zind, head of the Judges' Club, said the judiciary was backing Mahmoud in a bid to uphold "the sovereignty of the law and the principle of separation of powers," Al-Ahram reported.

He said the judges would hold an emergency meeting "to confront the current crisis that aims at harming the judiciary."

Zind's group had fiercely opposed the Islamist's election last June, which ended a military-led transition after a popular uprising overthrew Mubarak in February 2011.

Morsi's attempt to sack Mahmoud came after his Muslim Brotherhood movement called for protests against the acquittals.

By early afternoon on Friday, hundreds of protesters had gathered in Cairo's Tahrir Square raising chants honoring those killed in the anti-Mubarak uprising: "Either we get them their rights, or we die like them."

Brotherhood supporters briefly skirmished with demonstrators attending a rally in the square against the Islamist-dominated constituent assembly which is drafting Egypt's next constitution.

Television images showed a group of Brotherhood supporters tearing down a podium raised by their rivals.

The Supreme Administrative Court is set to rule on the assembly on October 16, after several lawsuits challenged its legality and the mechanism for choosing its members.

Morsi had pledged to retry Mubarak and his senior officials for their roles in the killing of protesters during the revolt, after trials that critics said had been bungled by the state prosecutor's office.

On Wednesday, a court acquitted 24 people -- including the former speakers of Egypt's two houses of parliament, Safwat al-Sherif and Fathi Surour -- of organizing the attack on anti-Mubarak protesters during the uprising.

The February 2, 2011, assault by pro-Mubarak supporters -- some riding horses and camels -- on protesters in Tahrir Square came on one of the revolt's bloodiest days, with clashes leaving more than 20 dead.

Around 850 people died during the 18-day uprising.

The Brotherhood's political arm, the Freedom and Justice Party, which Morsi headed before his election, said the prosecutor must either present new evidence for a retrial or resign.

"The responsibility for achieving justice falls primarily on the state prosecutor," it said in a statement reported by the party newspaper on Friday.

Mubarak and his former interior minister Habib al-Adly were sentenced to life in prison in June for failing to prevent killings of protesters during the revolt, but their police chiefs were all acquitted.