Roads Blocked across Lebanon in Protest at al-Hasan Assassination 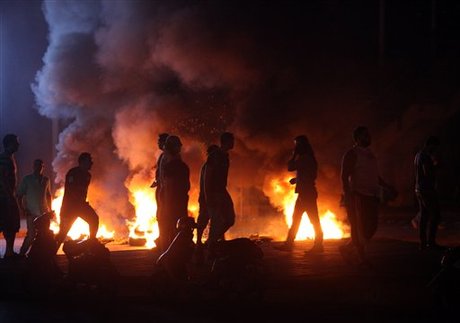 Roads across Lebanon were blocked on Friday as gunmen appeared on the streets of some regions and fired their weapons into the air, as news broke that Brig. Gen. Wissam al-Hasan, chief of the Intelligence Bureau of the Internal Security Forces, was assassinated in a powerful car bomb in the Beirut neighborhood of Ashrafiyeh.

The al-Beddawi highway in the North was blocked with burning tires, as well as the al-Mitain and Nejmeh Square streets in Tripoli.

In the Bekaa, protesters blocked the Saadnayel and the Chtaura-Zahle roads to condemn the crime.

Several roads in the capital Beirut were also blocked. Protesters closed the Arab University-Cola road as well as the Cite Sportive highway and roads in Tariq al-Jedideh.

Later on Friday, LBCI television said the Beirut-North highway was blocked near the Forum de Beyrouth complex in Karantina.

It also reported “an exchange of gunfire between Jabal Mohsen and Bab al-Tabbaneh” in Tripoli.

In the South, protesters blocked the Shebaa-Kfar Shouba road with burning tires. The Beirut-Sidon highway was also blocked at al-Naameh intersection.

The National News Agency reported that Mustaqbal Movement supporters in Sidon blocked the Elia roundabout in four directions with burning tires. The Hariri roundabout and and the city's western boulevard were also cut off.

NNA added that gunmen fired their weapons in the air as they roamed Sidon's streets in convoys. It noted that the army was staging patrols in the city to prevent any security incidents.

Why road blocks? Why terrorize people??? A bunch of criminals pretending to be mourning their leaders while planting fear and chaos in the streets. Shame on them. How does burning tires and blocking roads help??? Criminals! Filth!!!

oh well... hopeless country. They should go instead block Dahye. surround it, make a blockade untill Nusralla comes out of his hiding place with cuffed hands.