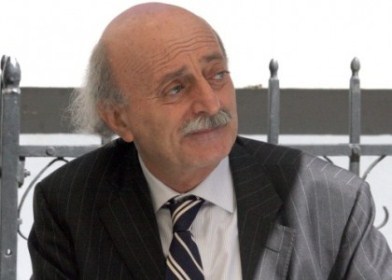 Progressive Socialist Party leader warned on Monday against forcing the government to “carry more than it can bear” in Lebanon in light of the increased demands for its resignation in the wake of the assassination of Internal Security Forces Intelligence Bureau head Brigadier General Wissam al-Hasan on Friday.

He said in his weekly editorial in the PSP-affiliated al-Anbaa magazine: “Insisting on the government's resignation will lead Lebanon to a vacuum and the country into the Syrian regime's trap.”

“The PSP is completely committed to civil peace as it is a red line that must not be crossed,” he added.

He renewed the party's readiness to participate in a national salvation government, “on condition that it enjoys local and regional consensus.”

The MP warned against “adventures that would lead to country to the unknown.”

Moreover, Jumblat said that the best way to honor Hasan and slain former Premier Rafik Hariri lies in supporting the state and bolstering security cooperation between the various agencies in order to avert further unrest.

“The best way to honor their memory lies in refraining from making accusations left and right, which only favors the Syrian regime that wants to drag Lebanon to internal strife at any cost to divert attention from the ongoing Syrian revolution,” he said.

In addition, he noted that President Michel Suleiman and Prime Minister Najib Miqati's statements that Hasan's murder may be linked to the arrest of former minister Michel Samaha coincides with the March 14 camp's views.

Samaha was arrested in August on charges of forming a criminal gang aimed at carrying out attack in Lebanon at Syria's behest.

Hasan, who was killed in a car bomb on Friday in Beirut's Ashrafiyeh district, played a major role in uncovering the plot.

“Hasan's assassination was not aimed against a sect, but against the state and its security agencies,” stressed Jumblat.

“The Lebanese people are therefore required to support the state,” he added.

Since the assassination, the March 14-led opposition has been demanding the resignation of the government.

Tell Walid Jumblat to Hoover it :)

jumblatt and aoun... two guys who think pleasing and compromising with evil powers brings peace. but it only makes themselves slaves to evil and addicted to evil power.

Jumblatt -like Aoun- is a mentally unstable twatt... Lebanon is hopeless when I see that such people lead communities.

He is a little crazy, bass hal marra ma3o ha2!

You all who commented here are idiots and have no idea what you are tlaking about, and jahlein (My Openion ;), you may think that you're gods)....the guy is avoiding going into a civil war that no one wants nor we should, we had enough for 15 years.....and lets be honest here....Christian and Sunni's are P*ssies and you can't depend on them in the case of a civil was....we've seen what they've done in Beirut in 2008. On top of that March14 are plain fags/cunts with no plan since 2005 except fighting each other and who can have more nwab....so who should Walid Bayk do, out the Druze community into a civil war. You guys need to grow up a lot!!!!

you d better grow up yourself and give arguments and facts instead of insults proving your head is empty... so before criticizing , do yourslef a favor, come back when you ll know how to write....

You Shia dog, whynare Sunnis and Christians cowards, maybe hariri is a coward because heis hiding in Paris, maybe Hassan nasr iblees is a rat and coward because he is hiding underneath dahiyee or in Iran. The only idiot here is you, just because some people have different views doesn't give you the right to insult others from behind your computer

The only one who thinks he's god is bashar and Hassan nasr iblees. Don't worry soon your gods will be fed to the rabid dogs

you all who commented here are idiots and have no idea what you are tlaking baout....the guy is avoiding going into a civil war that no one wants nor we should, we had enough for 15 years.....and lets be honest here....Christian and Sunni's are P*ssies and you can't depend on them in the case of a civil was....we've seen what they've done in Beirut in 2008. On top of that March14 are plain f*gs/c*nts with no plan since 2005 except fighting each other and who can have more nwab....so what should Walid Bayk do, put the Druze community into a civil war. You guys need to grow up a lot!!!!

you just offended yourself and fir sure you deserve it tin head.

Nothing good will happen until ASSad is gone.....then the playing field changes.

Ok. So what's the plan then?

I like the emphasis on the "Syrian regime trap" 22 years late or more! Don't you love these patriots of which Rafic Syria, Syria's best Rafic, is a proud member as the collective Alzheimerians say? arzak ya loubnan. loubnan awalan... ba3d 22 seneh w2aktar. You go, late-blooming warriors! You can save us!

Maybe you need to start with Saudi maybe grow some balls and help the Syrian in turning hte table on Bashar.....but not they will not, becccaaauussseeee they are CUNTS.......Listen, don't fool yourself, walid Bayk is only doing good to the currnet situation, and March 14 need to grow some balls, or better yet, maybe Ms. Shidyaq can give them some, b/c honestly she's the only one with balls out of them all.....!!! NO war and No for the Governement to disolve unless another approved governement is electred by the majority....this will save us all the 22 hard working years some of us have been trying to build....

All the politicians n Lebanon are big fraud, what was taken by power, can only be returned by power folks. Everyone needs to arm themselves like hezz bulshaytan, who said itis a civil war, they are working with Lebanon's enemies , therefore they are not from this nation, kill them all, every last cockaroach

Be the change you like to see (GHANDI), do not stopp to their level and behave like them. With patience, perseverance and faith all can be accomplished even though it takes a long time.

"Civil disobediance" ? lol won t work , lebanese are whether sheep following blindly a leader to tell them what to do or individualistic thinking only about their little person...

@ the1phoenix
Normally our views are in agreement. In this instance however we diverge slightly. Holding elections with this government in power will guarantee that the elections are slanted the M8 way.
Now is the time to test HA's intentions for Lebanon. How do they intend to act when the butcher of Syria is gone. Will they opt to for integration into the Lebanese system or will they forever be part of and beholden to Iran.
A government of technocrats respected by both M8 and M14 is very opportune right now, wouldn't you say?

Miqati is trying to keep the country out of the Syrian conflict. Siding with Bashar or his armed opponents would be a mistake. Jumblatt supports his strategy, although he pretends to bark against Damascus in order to get the next big check from KSA. Jumblatt is very cautious and he won't abandon Miqati until the Syrian regime falls.

This is the reality of Lebanese politics now. Btw, I wonder when Saad grows a pair and comes to Lebanon. HE IS responsible of the political vacuum. Miqati is conveniently filling the gap, in the best interest of M14.