12 Dead in Iraq after Bloody Day 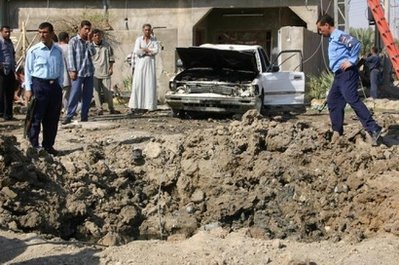 Bombings in and around Baghdad killed at least 12 people on Sunday, just a day after a wave of attacks during the Muslim holiday of Eid al-Adha resulted in Iraq's highest death toll this month.

The latest violence targeted Shiite Muslims, much like the shootings and bombings a day earlier, with the spate of attacks shattering a relative calm despite announcements by authorities that they would boost security during the four-day Eid break which began on Friday.

No group has yet claimed responsibility for the attacks on Sunday or those a day earlier that left 31 people dead, but Sunni militants typically look to target Shiites during Muslim holidays or Shiite commemoration ceremonies.

On Sunday evening, a car bomb in the predominantly-Shiite northern Baghdad neighborhood of Kadhimiyah killed at least 10 people and wounded 28 as they were outside celebrating Eid, officials said.

One medic reported women among the wounded, and said that the nearest hospital had received six corpses as well as the body parts of at least four others killed.

Earlier in the day, two bombings in the town of Madain, just southeast of the capital, killed two people and wounded 10.

The attacks came a day after a dozen nationwide shootings and bombings, with the worst of the violence striking Shiite neighborhoods in Baghdad.

"My children will stay at home today," said Mustafa Jalil, a resident of Sadr City, a district in northeast Baghdad that suffered the deadliest of Saturday's attacks.

"They are afraid to go outside because of yesterday's attack. I went out this morning, and I saw all the children from my neighborhood were playing just outside their homes."

Shiites in Iraq typically use the Eid holiday to visit relatives, the graves of dead family members or shrines of key figures in Shiite Islam across the country.

In the run-up to the holiday authorities in several provinces, including Baghdad, announced tightened security, apparently to no avail.

The death toll from Saturday's violence was the highest since 33 people were killed in nationwide attacks on September 30.