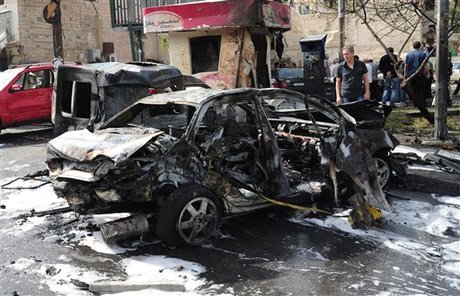 Twin car bombs at a military officers' club in southern Syria killed at least 20 soldiers on Saturday, a watchdog said.

The two bombs exploded minutes apart in the back garden of the club in the city of Daraa, the Syrian Observatory for Human Rights said.

A third explosion later hit another military post in the city, but did not cause any casualties, the Observatory said. The cause of the third explosion was not immediately known.

Daraa was the birthplace of the Syrian uprising against President Bashar Assad, which erupted in March 2011. The conflict began largely with peaceful protests against Assad's rule but turned bloody after rebels took up arms in response to the regime's crackdown.

State news agency SANA reported three car bombings hit the city, killing seven people and wounding many, but did not confirm the attacks were on a military position.

It also reported a car bomb had wounded three people in the southern Damascus neighborhood of Daf al-Shawk, while state television said a rocket wounded two young girls in the capital's Christian district of George Khoury.

The crisis has since morphed into a vicious civil war and in recent months, rebels have driven regime forces out of much of a pocket of northwestern Syria and are battling troops in several cities and towns.

Explosions targeting state security institutions have become frequent in recent months, and military intelligence branches in Damascus and other cities have been hit.

Most dramatically in July, rebels detonated explosives inside a high-level crisis meeting in Damascus, killing four top regime officials, including Assad's brother-in-law and the defense minister.

KSAVS (K.S.A Virgin Seekers) Co. just lost two of their finest.
Good riddance to all on both sides.

It doesn't say they were suicide bombings

we will hopefuly see such revenges in lebanon in 2013, M8 politicians should be targeted just like the M14, these thugs only understand the language of terror and violence, only then can we make peace.