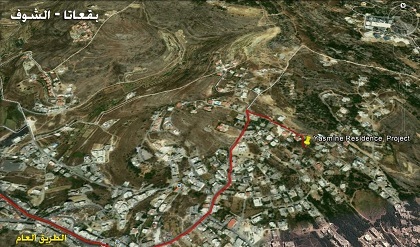 A spat broke out on Monday between residents from the Shouf town of Baqaata and a security convoy belonging to Hizbullah, media reports said, as another unconfirmed report said the clash erupted after the discovery of a Hizbullah telecom network in the area.

“A convoy comprising three cars with tinted windows and carrying gunmen made its way from Niha towards Shouf's towns, but it raised suspicions as it passed through the town of Mristi, prompting a young man from the town to intercept the convoy and inquire about its destination,” LBCI television reported.

“The members of the convoy claimed that they are army intelligence agents and continued their trip towards the town of Baqaata after passing through al-Mukhtara,” it added.

But contacts were made with the army's Intelligence Directorate which confirmed that the convoy does not belong to it, LBCI said.

It quoted a security source as saying that “the convoy belongs to Hizbullah and it was probably carrying a party official.”

“The members of the convoy told the army that they went astray as they crossed from Jezzine,” LBCI added.

As the cars arrived in Baqaata, “a clash erupted with residents from the area and the vehicles sustained material damage.”

Meanwhile, Radio Voice of Lebanon (100.5) said the Progressive Socialist Party stressed that the Baqaata case is now in the hands of the army, adding that the PSP called for unveiling the circumstances of the incident as soon as possible.

The PSP “received a series of phone calls from Hizbullah that were aimed at containing the repercussions of the clash.”

“One of the suspicious cars in Baqaata tried to flee from the army's patrol, hitting two people during the attempt,” the radio station added.

Sources close to the PSP confirmed to Radio Voice of Lebanon that the convoy belonged to Hizbullah.

Later on Monday, the radio station reported that “the Baqaata spat erupted after residents discovered an illegal telecom network belonging to Hizbullah that passes through their town all the way to al-Mukhtara.”

A state within a state. Brings back memories of the PLO doesn't it?

And most likely they will bring the same death, destruction and civil war on lebanon the same way the PLO did. Once upon a time there was an assad regime that vetoed anyone in lebanon to have weapons but their hizzie clients. In the near future everyone will have missles of course not to mention crazy suiciders, add to the mix millions of syrians with serious grudges against iran/hisbustan. Do we have to destroy lebanon for these folks to get it through their heads?

That is absolutely TRUE: A state within a state! Shamefully, the text reads: "...a security convoy belonging to Hizbullah..."; paraphrasing: Illegally-armed thugs conducting ops as they please, under the numb protection of the Lebanese Gov! I always thought army of one meant One Army Only! The math is simple, hizbola will never rest before destroying the whole of Lebanon!Remember these simple words...

I cannot fathom people condoning this have any sense in their head of what a country really is. The sooner we can get rid of this and all militias will we finally be able to start our upward climb.

Later on Monday, the radio station reported that “the Baqaata spat erupted after residents discovered an illegal telecom network belonging to Hizbullah that passes through their town all the way to al-Mukhtara

keep building these illegal telecom networks.. the actions of HA is enraging more and more people.. self-implosion countdown has begun..
oh ok.. so next time im in da7yeh and i feel threatened i can run over some people and i would be excused??
Lebanon is not yours to do as you please... and this is the problem for the get-go with HA.. their holier than thou attitude and the we are allowed and YOU are not.. 2013 looking like a mighty good election year if you ask me..

Next time your go thru Borj Barajneh you may roll over anybody that threatens you because they look at you in a strange way. Perhaps because you're a stranger, but it's a good enough reason to drive and 'push them off' with your fender.

if harriri was there to install something that is illegal on land that is not theirs i would applaud you for standing up to him... but you have a twisted logic of what society and rule of law is... not because you are in HA can you go around in a motorcade and install illegal networks.. but to you.. everyone needs to get out the way...

solidere was purchased and legally belongs to them.. now regardless of the way they managed to buy up all the plots of land...
all i am saying is 1- a motorcade is a privilege given to MPs and ministers and other party leaders to offer a degree of protection... who was in that motorcade? no one.. only regular HA members... so why do they get a motorcade in the first place??

2- the article is the one that mentioned the discovery of the illegal network.. now if they got enraged prior to... during.. or after they found out about the illegal network is not an issue... the issue is they have a RIGHT to be enraged when HA is infringing upon them and their town...
ya man bil mshabra7.. iza wa7ad ija shafat bi day3teh byekol 2tleh... keef hay??

and when you dont have a right to have a convoy.. such as the case as these HA members... then yeah.. chase it down and beat them.. but if they have a right to have the convoy and are there on official and legal business then my friend you cannot (and i am sure the people of this town would not) get up in their face.

Arzak, don't waste your time and energy on 'Movaten', the Farsi.

the whole of ouzai is illegal and built on state lands...

isnt Aoun from Haret Hreik??? hows that working out for him? i am not saying what Harriri did was right at all.. he screwed alot of people for sure.. but it was done in a "legal" way.

Bravo for the town for standing up to the Hezz. Destroy the telecom cable. The Hezz are no longer wanted anywhere.

The Hezz are on the losing side of the Syrian battle too.

The chouf is and has always been a Lebanese bastion in spite of the current stances of its leader.
hizbushaitan are trying to spread in the country as much as possible.
why the army did not arrest the hizbushaitan gunmen? isn't there a decision to arrest anyone carrying weapons?
is this the army they want us to trust?

Go Baqaata go .Next time burry them alive ,who do they think they are ,haven’t they learnt from May 2008 are they itching for another arss kicking .Hezb Iran for the record we will cut any hand that tries to attack our people and when we finish with we will cut Hasan`s head .God bless the Chouf..

Compared to the girls that lurk in your SICK MIND, ofcourse the prettiest and most decent girls in the Arab world are definitely inaccessable except through the laws made by God . keep on dreaming ... in hell I just wonder how no one noticed your sick comment

2000. HA, the resistance, liberated the south. The arabs were proud of HA. Iran was strong as ever. Syria was a strong ally to HA. The lebanese loved HA.

2013. HA, the milicia, is the biggest thief in lebanon. They also kill anybody against them. Today, Arabs hate HA. Iran is bankrupt. Syrians, assad gone, want to destroy HA. Most lebanese are fedup of their state within a state.

HA. You can go against the people sometimes. Not all the times.

Couldn't have said it better, this is exactly the way I feel.

and in the 80s' it was abducting foreigner inside Lebanon.

Nice one "Lebanon_first" This is definitely a Bob Marley theme song here, GET UP, STAND UP. the words define what the residents of Baqaata/Chouf. Stand up for your right Get Up, Stand Up, don't give up the fight Get Up, Stand Up. Life is your right So we can't give up the fight Stand up for your right. Second part: You can fool some people sometimes But you can't fool all the people all the time So now we see the light We gonna stand up for our right. God bless this man - all his words are wisdom.

Momo, nice try douchebag. Rastafarians consider Zion to be in Africa, not Israel. They also consider their deity to be a descendant of king Solomon, and they believe in the prophesies of the Jewish bible.

If Bob Marley were alive today, he would be on the side of the Syrian people being oppressed by the butcher in Damascus. And he would have been on the side of the people who rose against the ayatollahs in 2009. So don't try to co-opt Bob Marley to your evil cause, I'm sure the BFR (Big fat rat) would not approve.

Here's a better song for you:

very well said, and this what i been telling some sincere (but brainwashed) M8'ers on here. The reason for your above explanation is Iran and Iranian agenda. If HA truly represented lebanese interests none of this would have happened. Hariri would have not been killed either.

do you remember the days when everyone respected and adored nasrala?? It is sad to say that israel succeeded where people thought it failed: left lebanon to destroy itself, israel knew full well that HA will eventualy destroy its only true competition in the region.

i guess this incident is a wake up call for the land lord of moukhtara mr walid "360 degrees gyroscope" jumblatt. no matter how you sweet talk hezballah they never did and they will never trust you and they dont trust your stance against their mentor the assad regime.
and walid you should always remember that in hezballah's lexicon: the ennemy (jumblatt) of my friend (assad) is my enemy.

The simple truth is that there will be no peace and stability in Lebanon while Hizbala is armed....regardless of what excuses M8 provides...no peace with state within a state...