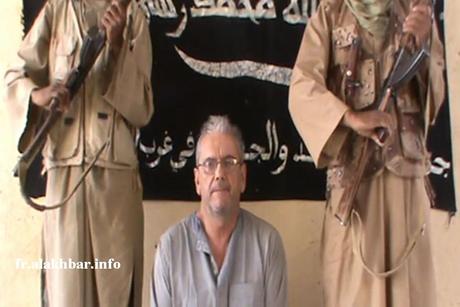 A Mauritanian news website on Monday published images of a French citizen kidnapped last week by one of the armed Islamist groups controlling the north of neighboring Mali.

Two photos published on the site Alakhbar showed the man, identified as Alberto Rodriguez Leal, 61, with his head bowed, wearing a blue shirt and flanked by two armed men dressed in kakhi robes.

"My name is Rodriguez Leal Alberto. I was kidnapped in Diema, between Nioro and Bamako by MUJAO" the Movement for Oneness and Jihad in West Africa, read the transcription of comments made by the hostage in an accompanying video.

According to Alakhbar the images were taken on Sunday.

"I ask the French government to respond rapidly to their demands," Leal added. MUJAO has not yet publicized its requests in exchange for the hostage's release.

"I am not at fault in this kidnapping, it is the government which is implicated by its outside actions."

Leal said he trusted the French government would rapidly deal with his situation and "find a favorable outcome."

"For my family, don't worry. I am being well treated," he added.

Leal, who was kidnapped on November 20 while driving in a camper van in south-western Mali from Mauritania, was initially identified by Malian security sources as Gilberto.

He was born in Portugal, but is a French citizen.

MUJAO, one of the Islamist groups occupying the vast arid north, on Thursday claimed responsibility for the latest kidnapping, bringing to 13 the number of hostages held by hardliners in the region. Seven of these are French.

"We claim responsibility for the kidnapping of the Frenchman in south-western Mali near the Mauritanian border," said MUJAO spokesman Abu Walid Sahraoui.

Earlier another spokesman from the group had accused France of wanting "to lead armies against the Muslim people."

MUJAO and Ansar Dine (Defenders of Faith) swept into Mali's northern cities after the March coup, on the flanks of a separatist rebellion by Tuareg desert nomads.

They swiftly ousted their secular Tuareg allies and set about imposing brutal sharia low on the population, prompting some 400,000 people to flee their homes.

The armed Islamist groups have ties to Al-Qaida in the Islamic Maghreb (AQIM) whose involvement and presence in the occupation has increased.

This has heightened fears among western powers that the region could become a new haven for terrorists seeking to launch attacks in the region or against Europe.

France is one of the leading western powers backing west African efforts to send in a force of 3,300 troops to drive the Islamists out of the north. The intervention plan is awaiting approval from the United Nations.