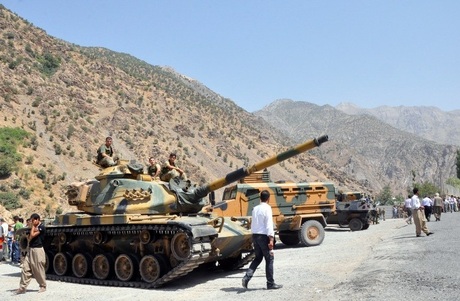 Turkish troops have killed 13 Kurdish rebels during clashes that erupted Tuesday in a mountainous area in southern Turkey near Syria, the local governor's office said Wednesday.

Backed by air power, the Turkish army launched an offensive against militants of the outlawed Kurdistan Workers' Party (PKK) in the Amanos mountains and clashes were continuing on Wednesday, the governor's office added.

The PKK, labeled as a terrorist group by Turkey and much of the international community, took up arms for autonomy in Kurdish-majority southeastern Turkey in 1984, sparking a conflict that has claimed about 45,000 lives.

The Turkish military has beefed up border security with tanks and troops amid the escalating civil war in neighboring Syria. Some government officials have tied the recent upsurge in attacks to the chaos there.

The Turkish dictionary is very interesting.
Kurds who are killed by Turkish forces are rebels.
When Turks trying to break a blockade are killed on a ship by Israelis after being warned more than once, the Israelis are terrorists.
What would the Kurds be if/when they kill Turkish soldiers, I very much doubt that it would be "rebels".