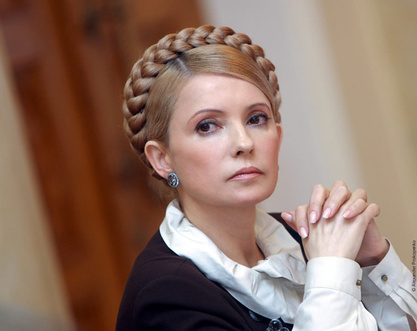 The decision was reached at a congress of opposition leaders including members of Tymoshenko's party and that of ex-parliament speaker Arseniy Yatsenyuk, the alliance said in a statement.

"Yulia Tymoshenko has shown that she holds European and democratic values, that she is capable of the fight," Yatsenyuk said in the statement.

Tymoshenko last month staged a two-week hunger strike to protest against alleged fraud in parliamentary elections won by the party of arch rival President Viktor Yanukovych, to whom she lost the presidential poll in 2010.

The former prime minister is serving a seven-year sentence for abuse of power while in office. Her conviction in October last year sharply worsened Ukraine's ties with the West and exposed Yanukovych to accusations he was persecuting political opponents.

Her supporters believe she will ultimately be released from prison through a ruling by the European Court of Human Rights.

"We are waiting in the next few months a decision by the ECHR," in the case brought by the opposition, Yatsenyuk told Interfax, adding: "I hope it will free Yulia Tymoshenko."

Tymoshenko insists she is a champion of Ukraine's integration with the European Union but critics have accused her of ruthless pragmatism, changing her beliefs with the political winds.